Now I had the car safely home, it was time for a more detailed evaluation. The fact that the rear brakes were shot and at least one of the dampers had failed didn’t matter too much, since all that would be changed anyway, I wanted to find out what sort of car it was. As it happened, I had a useful benchmark to compare it to… 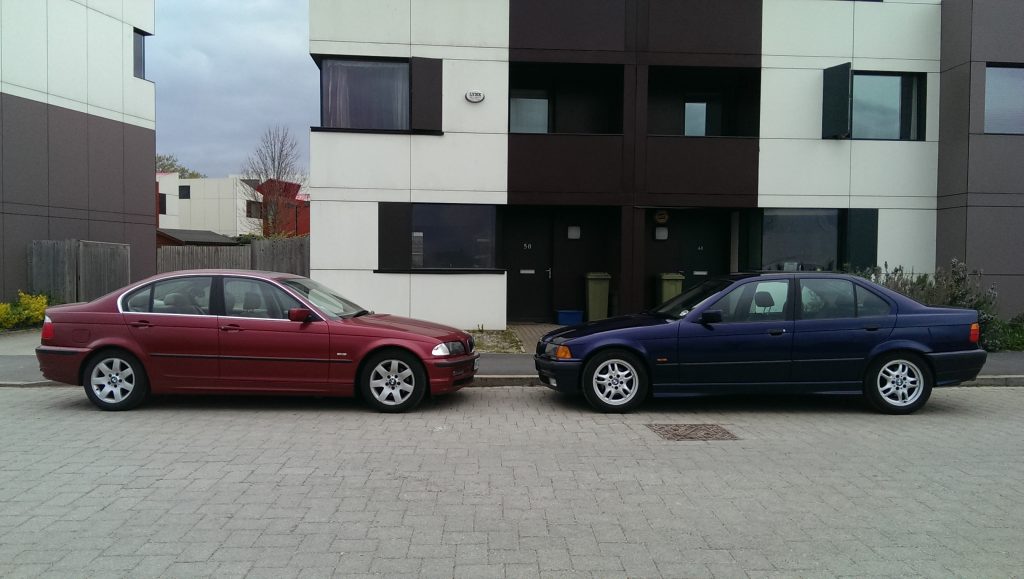 Yes, another 328i, a 1999 E46 that I’d owned for two years. I’d considered selling it and finding one car that could serve as a daily and still work well on track, but in the end there wasn’t an ideal answer*, so I decided to go for a dedicated track car, figuring this would give me more freedom to modify it for its new purpose. Little did I know how far that would end up going…

I wrote my thoughts at the time. Here they are:

“It’s very, very interesting to drive the cars back to back. Maybe it’s exactly how you’d expect! The E46 [my red road car] makes a magnificent cruiser, it’s heavier-weighted and more direct than most modern cars but is ultimately easy to drive, and runs quietly, smoothly, effortlessly. Still capable of making a great noise, tearing down a back road and putting a big grin on your face, but perhaps a little sanitised.

The E36 [the newly purchased blue car] takes the same kind of Jekyll and Hyde balance, but turns it completely on its head. From the moment you fire it up, with a stiff, direct-feeling key that whumps it into life almost instantaneously, this is a different car. I thought the steering was relatively heavy in the E46 – it ain’t. This is more like it. The clutch too. The throttle has a cable, not a series of digital instructions, and even the gearshift is heavier and more connected. Forget the cars only being two model years apart, this was released in 1990 and it never left. I can smell petrol. Excellent. 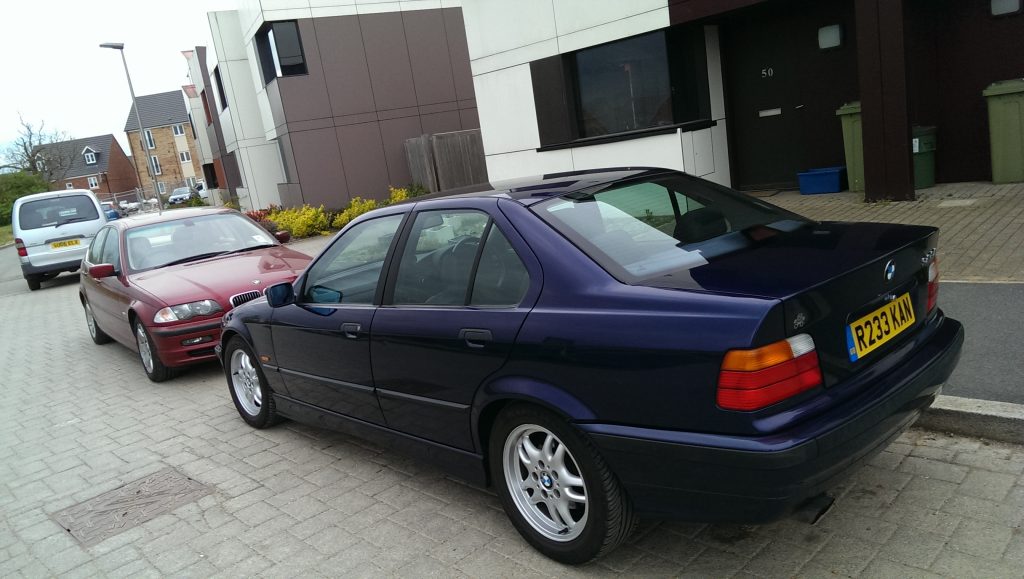 On the road, it’s much firmer (it has M-Tech suspension from factory), but not in a crashy way, just firm. It’s on 16″s like the E46, so the difference in the chassis setup is easy to pinpoint. But once I get past the speed bumps on my estate and onto a more open road, that ceases to be an issue at all. The car has… urge. It’s an urgent thing. When you plant your foot there’s an immediacy to the way it kicks you in the back, the noise turns on and it begs for more revs. Snick the next gear home and as you feed the power back in that distinct kick is there again – not rough, not because you fluffed the change, but because everything right through from the throttle butterfly to the tyres feels directly connected and it does what you ask, when you ask. It’s fantastically raw by comparison.

Little things really please me. Like when I rev-match on a downchange, it always seems to be exactly where I wanted it, just so. It feels lighter, pointier, everything has much more of a sharpened edge.. And of course, it’s faster, which when you’ve owned the same car for two years you can’t fail to notice. And become a little addicted to. 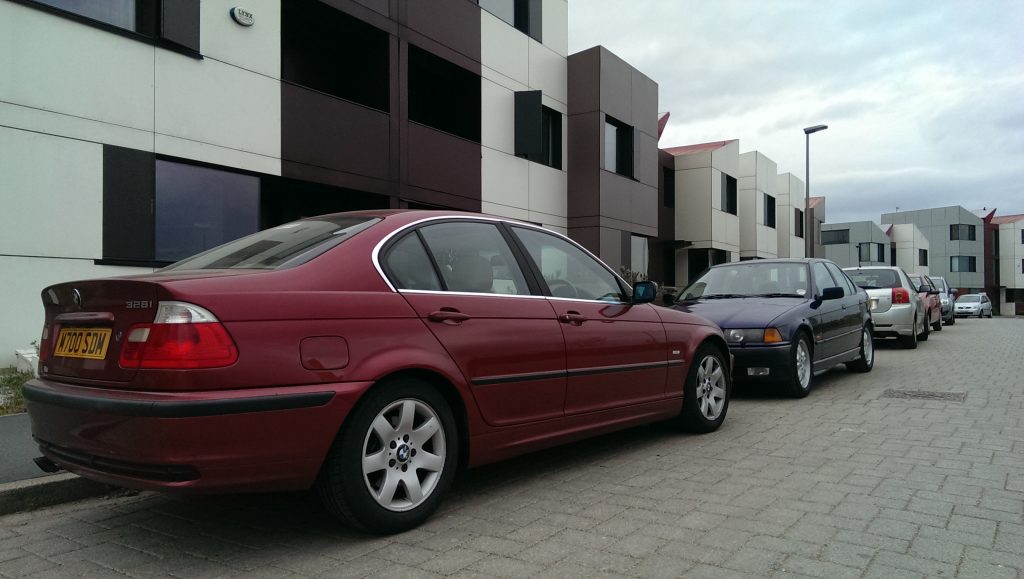 I’m bound to say it isn’t half as good at being “a car”. It tries, but it just isn’t – it makes all sorts of little random-interval squelches from the HVAC, buzzes from fans, little pops and squeaks and farts.. It shudders badly when you upset it over a bad road, and if you get the right frequency you can even feel the steering column move. Oh, and at the moment the aftermarket head unit assaults you under hard acceleration by lunging out of the dashboard in a mad bid to skin your knuckles, but perhaps we can’t blame the car for that one. It also has no cruise, no steering wheel controls, no parking sensors, no sunroof, no auto wipers (or even an adjustable intermittent), no nice soft-touch plastics, nowhere to put your shades, the air con doesn’t work.. None of the things I’m used to. I drove it to work for a week and could see how, when you’re tired or had a long day or just plain can’t be arsed, it would annoy you.

In other words.. It’s perfect.

I absolutely made the right decision buying the E46 back in 2012, it’s especially obvious when you get back into it after this, it’s just a superbly competent car. So there’s my road car. This new toy is louder, harsher, tattier, less convenient, less finished… But when you have nowhere to be and everywhere to drive, it’s the one. By a mile.

And I did! Reading back, it all feels as true now as it did then, and I had that lovely E46 for another eighteen months after writing. It eventually ended up as the donor for someone’s kit car project, so at least some of it will live on. The car I’d just bought felt like a bit of a revelation, so much more analogue and engaging, and I couldn’t wait to try it out on a circuit.

Fortunately, I wouldn’t have long to wait, with a sprint at Blyton Park booked in two weeks’ time… 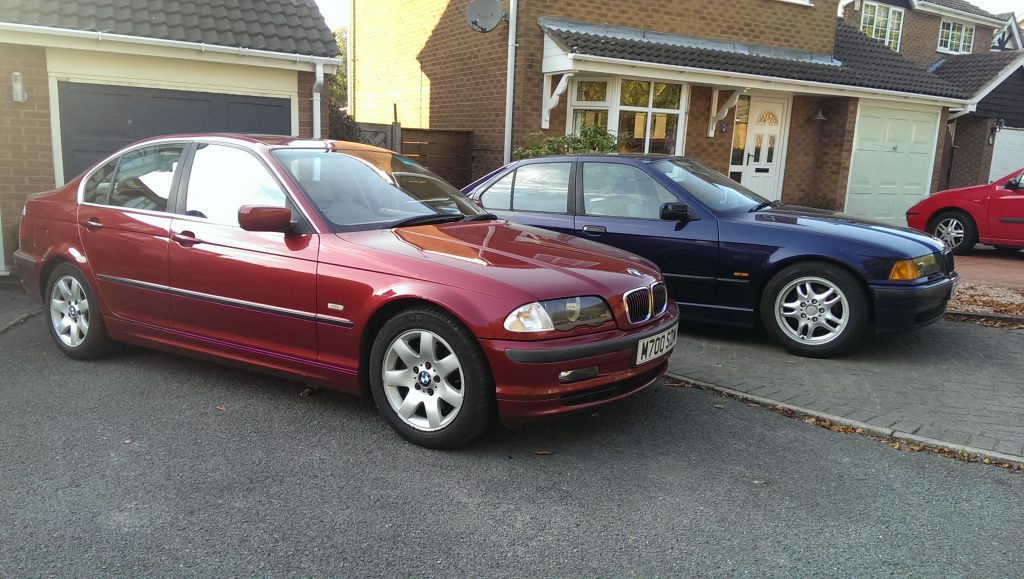