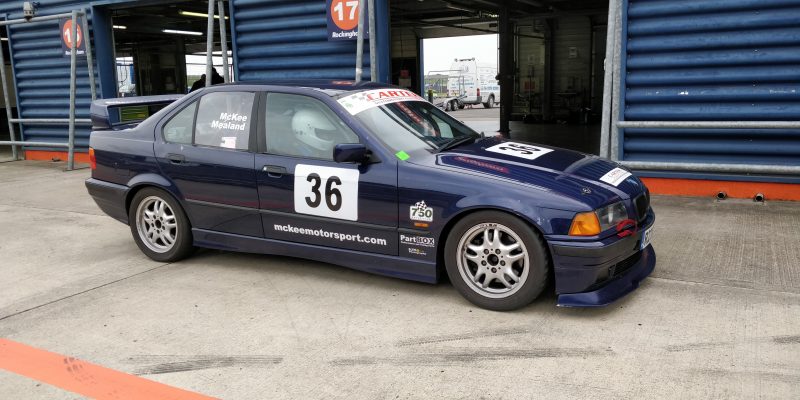 Ah, Rockingham. You wouldn’t expect an infield circuit pegged inside what’s primarily an oval course to be much good, but actually, I really enjoy the challenge this track offers and the car has always felt happy – and fast! – around here. It has a bit of everything, from awkward off-camber entries to a low-speed, high-grip chicane, and one of your few opportunities to commit to a turn flat-out in fifth gear.

As always, despite both being quite familiar with the circuit, we did a track day before the race meeting to make sure we were happy with the car and get our eye in. This was also the debut of McKee Motorsport Budget Solution #17, an alternative to the thousands you can spend on pit-to-car comms from Autotel. Very straightforward – a pair of standard Cobra two-way radios that might normally be used by hikers, and a pair of headsets aimed at motorcycle use. These came with surprisingly high-quality earpieces and microphone, with a remote push-to-talk button. Once each helmet was equipped, we could connect to the car by plugging in just one cable to access the radio and the PTT button. 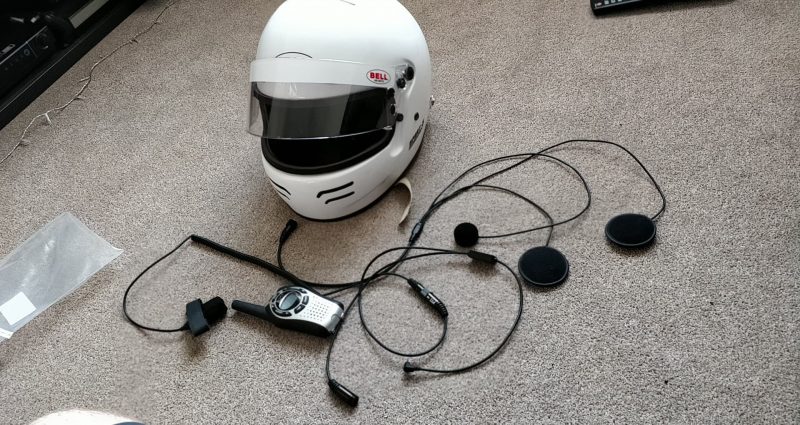 Amazingly enough, for a total outlay of £55, it works brilliantly and we could communicate around roughly two-thirds of the Rockingham circuit! This not only makes conversation and planning during testing far easier, it also means there’s no need to try and get lengthy or complicated messages onto a pit board. Very pleased, and all the more so upon finding that the extra fuel pump meant we could run the car halfway into the red zone of the gauge before getting any starvation. 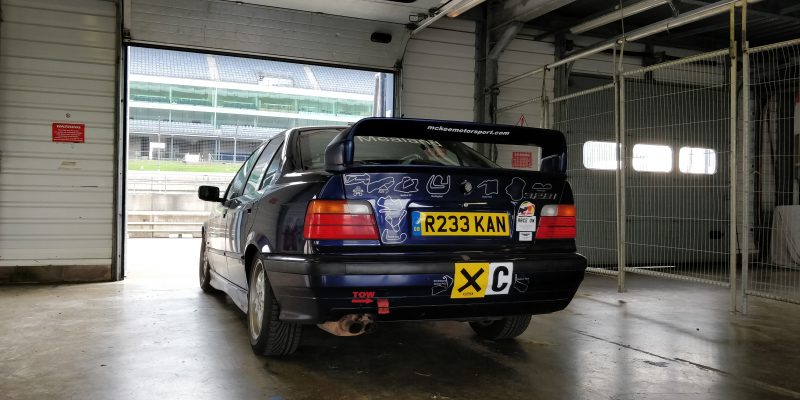 With a successful test day in the bag, two days later qualifying was upon us. Finally, a chance to find out how the newly upgraded car would perform against the clock! Adam went out first and produced a 1:47.32, before handing the car over for me to take a longer run at a quick laptime. Consistency was no problem with five 1:45s rattled off, but I could go no faster, posting a 1:45.02 which had felt pretty good. I was a bit gutted to see P4 on the board as I drove past, but found that the next two cars – Liam Crilly’s RX-8 and the ever-quick Orr/Winchester E36 Compact – were only four tenths away. 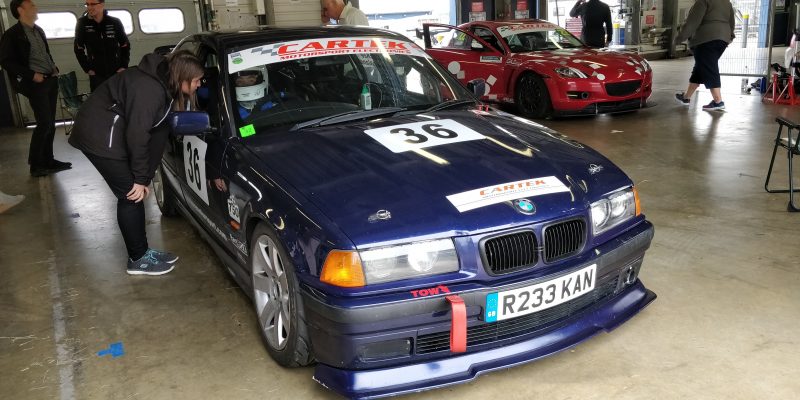 Come 2pm, Adam’s first-ever race start was looming. We got him strapped into the car and settled nice and early – nerves can be a real struggle for your first few races, and starting mid-pack at a circuit with a tight first corner is a tough gig. The best thing is to stay methodical and avoid being rushed. After a last chat with girlfriend Natasha, it was time to ride around to the assembly area.

The long wait while the previous race finishes can be nerve-shredding if you don’t have some company – or so I told myself, sitting in the car taking photos after running through the start procedure one last time! 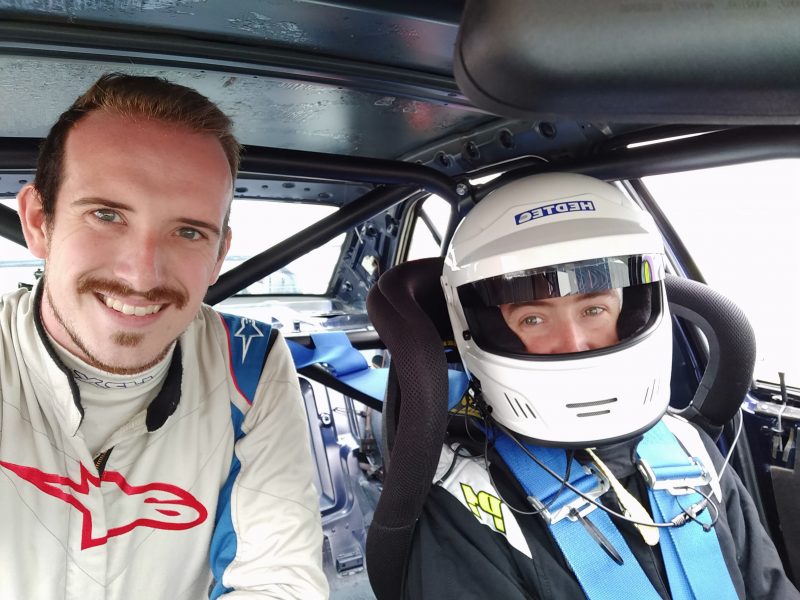 Finally though, it was into Adam’s hands alone as he sat 19th on the grid of 27 cars to take the start. Rockingham offers us a great vantage point on the roof of the pit building, so I could see the clean getaway and, even better, his unscathed progress through the first corner – but only one turn later there was some drama to deal with as the BMW 130i of Colin Gillespie fell victim to a tankslapper and spun across the field.

Adam kept his cool and guided the car around the wreckage in something of a baptism of fire, but it wasn’t long until the safety car was called out to give the marshals time to clear the circuit. He was afforded just a couple more racing laps until another safety car period to clear a Seat bizarrely abandoned at the pit entry. The time window for mandatory pitstops opened with the safety car still out, and the pitlane suddenly became busier than the circuit as everyone dived in to take advantage! Aware that it was strategic suicide, I left Adam out on the circuit as long as possible so he could do some racing. This gave the unlikely, but brilliant outcome that Adam was the outright leader of the race for a lap and a half! 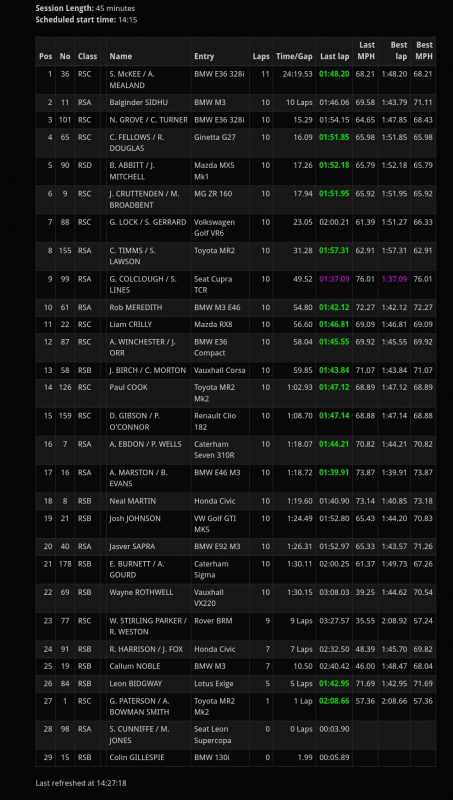 Finally, I called him in at the very end of the pit window, taking over the car with 16 minutes left to run. It’s sometimes nice to have a lap or so of clean air to bed yourself into the car and the circuit, but I was given no such luxury – the moment I left the pits, I had the #101 BMW 328i of Nik Grove and Carlo Turner right on my tail!

Nik, feeling like all his Christmases have come at once

The pressure Nik poured on straight away was phenomenal, and against a car that had qualified 1.7 seconds quicker, my only option was to give it everything right from the start. In this sort of situation it’s important to try and avoid “driving in your mirrors”, reacting only to what the car behind does, but with feints to the inside and attempts to move around me at almost every corner, Nik made it extremely hard not to! It was all I could do to keep hitting my marks, control the car’s inherent oversteer and keep him behind. I did finally relinquish the position to a classic move into Tarzan, and lost the chance to fight back by locking up the brakes during the heavy stop into Deene.

The battle was so intense and enjoyable that it couldn’t really be captured from my car alone. Thankfully, Nik shared his footage with me, so we can show split-screen action from both cars together! Below is our whole race onboard, from Adam’s evasive start through some quick, clean laps and into that battle after the driver change at 29min30.

This meeting really stands out for me because troughout the day, the support we had in the garage was absolutely phenomenal. Adam’s parents made the trip down from the Scottish borders and actually got to see him race this time – unlike the cancelled Donington meeting! – but that’s far from all, with my ever-dependable mum and grandad in attendance, and more friends than we could have hoped for. Sav, Urvi, Calum, Joe, Courtney, Tyrrell, Geoff, Neil and of course Em and Natasha – thank you! It’s amazing to be able to share this with you.

The final tally shows we finished 5th in class, and a respectable 13th of 29 starters overall. Not the result we’d hoped for, but given the conscious decision to give time away under the safety car and an apparent lack of straightline speed, we were happy enough. I put the car on the dyno after the race, and it delivered only 204bhp and 274Nm – a significant drop from the last time it was tested, and meaning we raced at 164bhp/ton in a class that would allow up to 180. Diagnostic work and a proper ECU calibration on the dyno is needed to put that right for next time out, but it underlined the great effort in staying competitive! 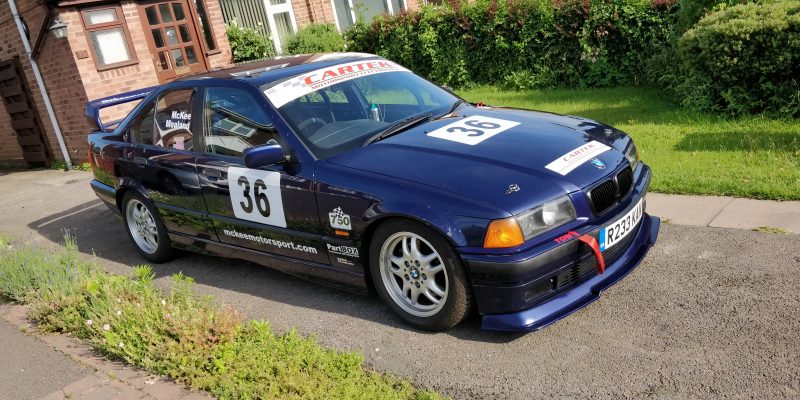 Next up, Cadwell Park in late July. We’ll have more power, stickier tyres, and a shot at some silverware…