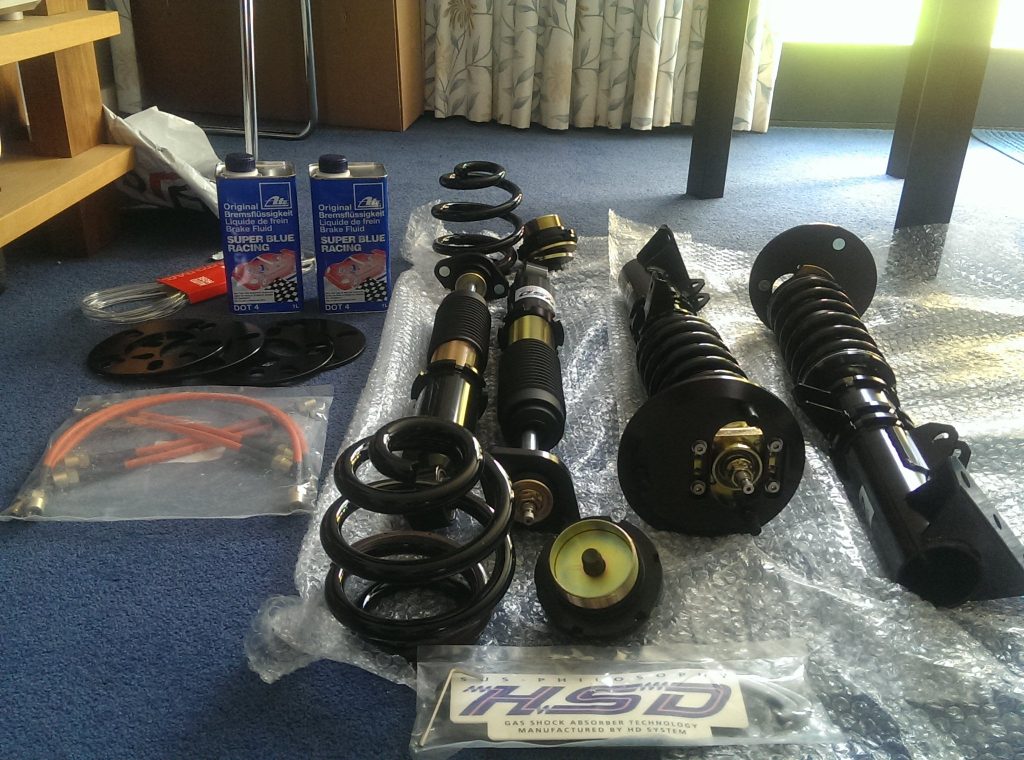 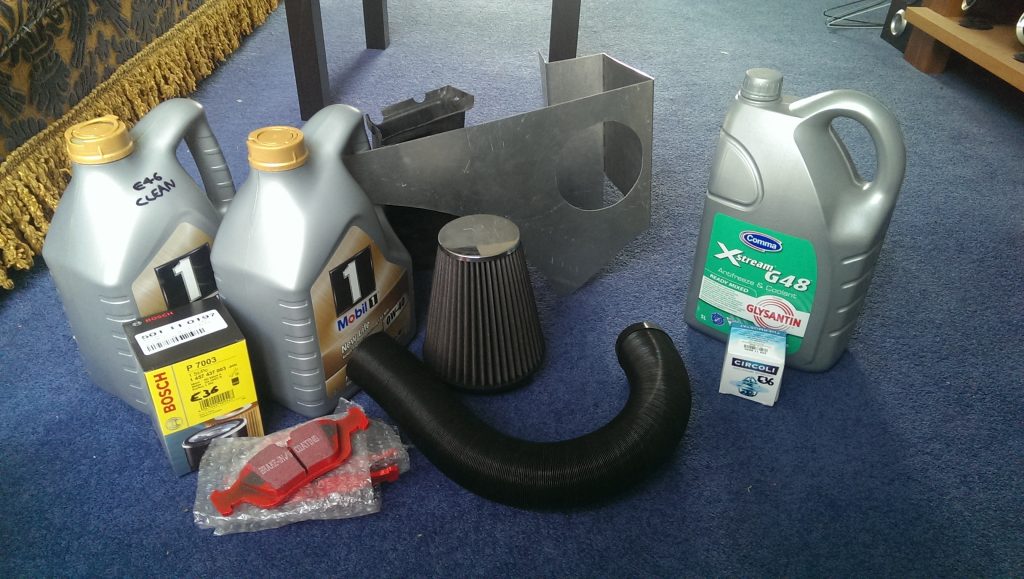 If you were wondering what was on the to-do list from that first outing at Blyton Park, now you know! So, more or less in order of importance, here’s what I put right before the next event:

Stopping Power – some would be nice… 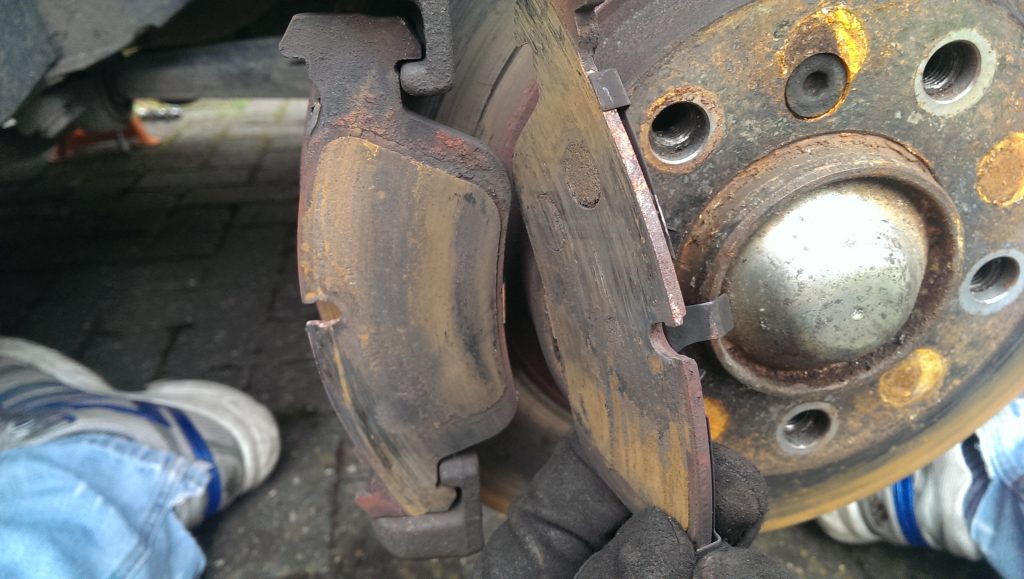 Clearly these weren’t up to the task, so the first step up was to try EBC Redstuff. An attractive £65 a set for the front axle and well rated by fast road users, they made sense. I always find a comparison between what you took off and what you’re now fitting to be quite a satisfying photo: 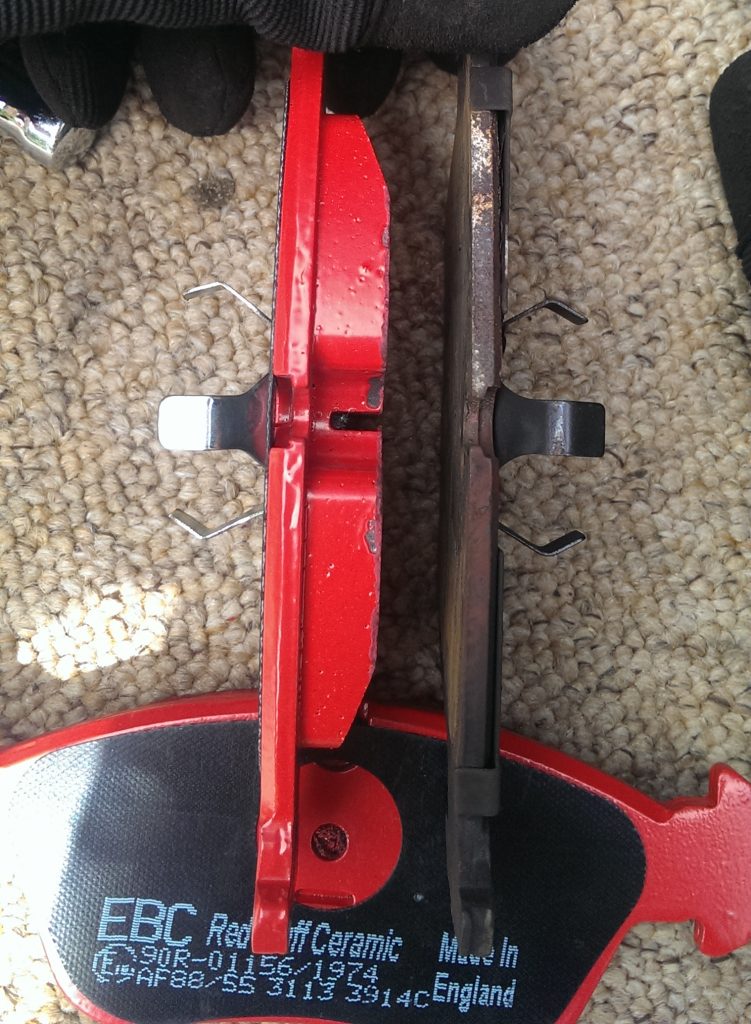 While we’re on the brakes, I bled the majority of the fluid and replaced it with ATE Super Blue, one of the most cost-effective racing brake fluids. This would make local boiling of fluid in the calipers, and the resulting long, soft pedal, far less likely. I say majority, because the rear caliper bleed nipples were rusted down to almost nothing and completely seized, and for lack of a welder I couldn’t undo them. This also meant I couldn’t fit the braided brake hoses in the photo at this point.

“Is that your E36?”, asked someone in the paddock at Blyton.
“Yeah, why?”
“I was following you earlier, and thought you should know the rear left wheel is bouncing in and out of contact with the ground in left-handers..”

Certainly that would explain the vibration! As if the soft springs weren’t enough reason to want to make some suspension changes, at least one damper being completely toast was another. The offending article is shown below, and offered no resistance whatsoever! Its age is rather apparent next to its replacement: 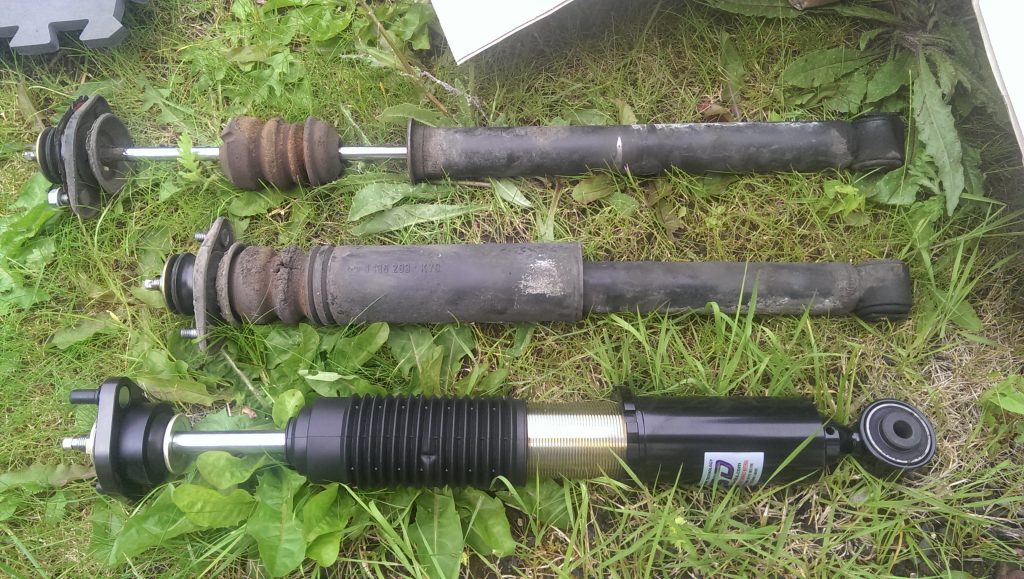 The springs and dampers I chose were HSD Dualtechs. Quite popular on MX-5s and E36s at the time, these weren’t a big brand or a particularly good damper, but they did offer a lot of adjustability for a very low price. I paid £565 for the full set, and got height adjustable spring platforms all round, one-way adjustable damping all round, and quite a wide range of front camber adjustment. All of these are invaluable setup tools, and while I was learning the car, I was quite happy having budget equipment if it meant I got the opportunity to adjust and test new things. 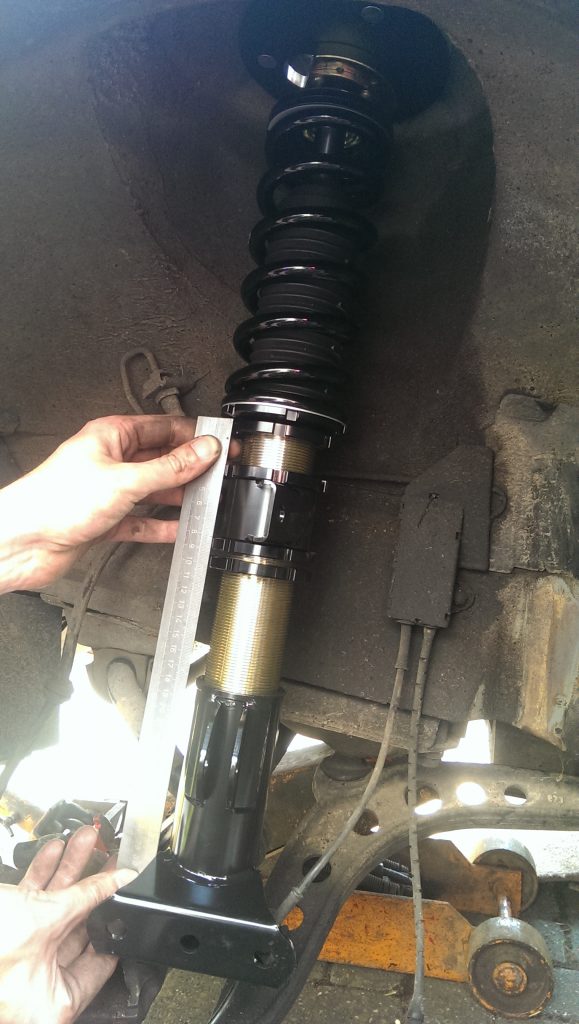 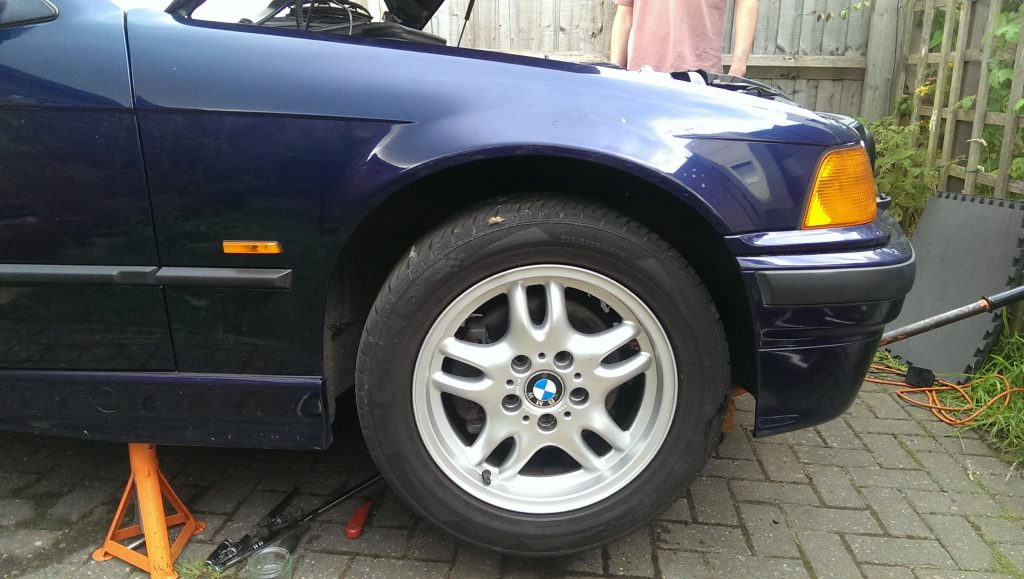 The stiffness and reduced travel of the new suspension shows up quite well here – with the wheel off the ground, it sits in nearly the same place in the wheelarch as it used to when fully loaded! 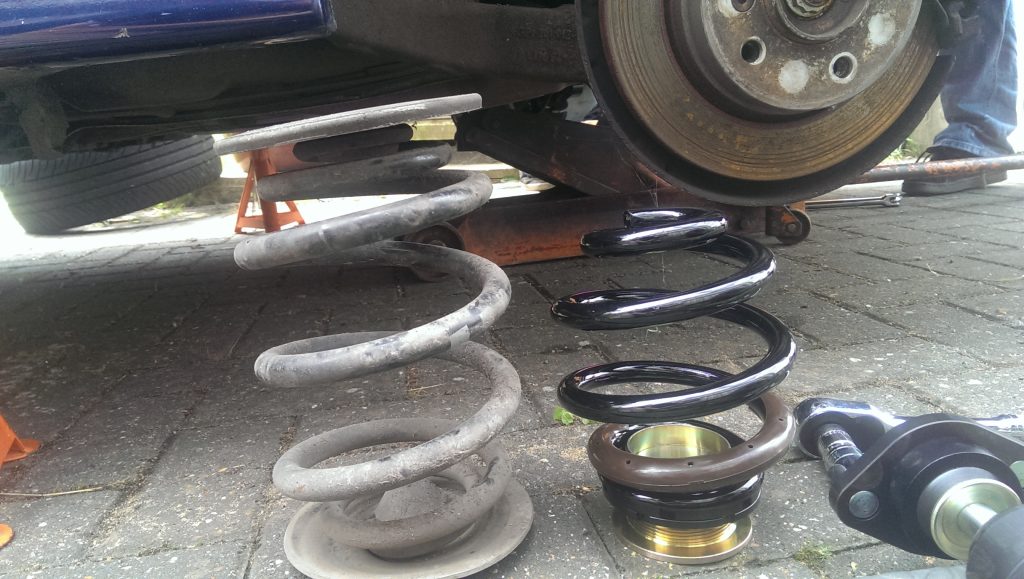 Drastically reduced rear spring length did at least make it much easier to install.

I didn’t even know what oil was in the car for its first outing. I did know after a few runs that it wasn’t up to the job, with a tappety noise from the cylinder head whenever the engine was hot. This is apparently quite typical for an M52 engine that’s struggling a little for oil quality, either through cheap rubbish or degraded oil. Easily sorted with some Mobil 1 0W/40. 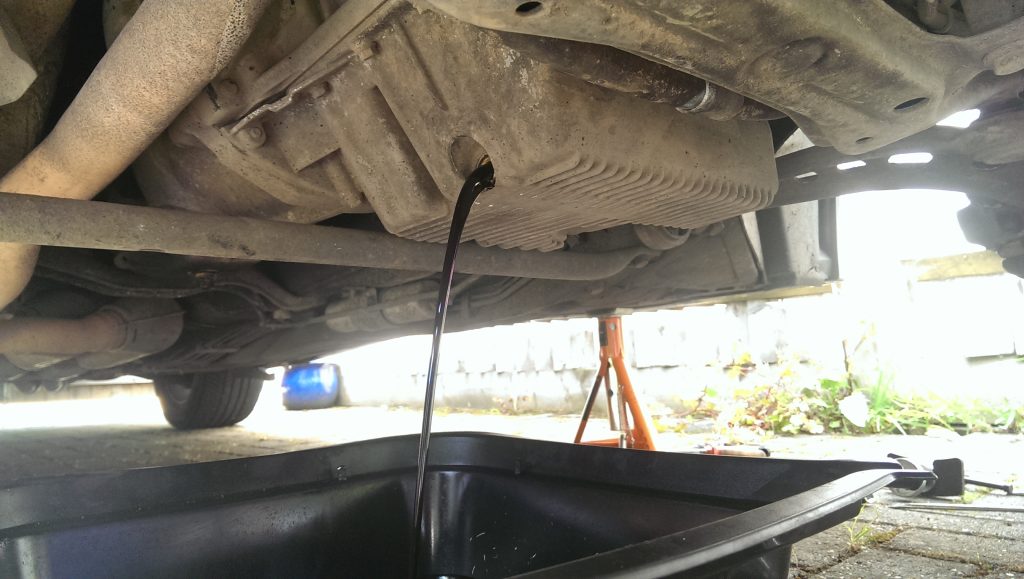 Stay cool – but not THAT cool!

The thermostat was stuck open when I bought the car. This is just fine for a pure race car that’s only used on circuits, many don’t have thermostats at all, but when it’s used on the road and often has to sit on motorways? Not ideal for fuel consumption or engine longevity. I left this job until after the first event, as any other issues I found with the cooling system would just lead to repeating a lot of the work. It was straightforward to change with a standard part and I renewed the coolant at the same time. 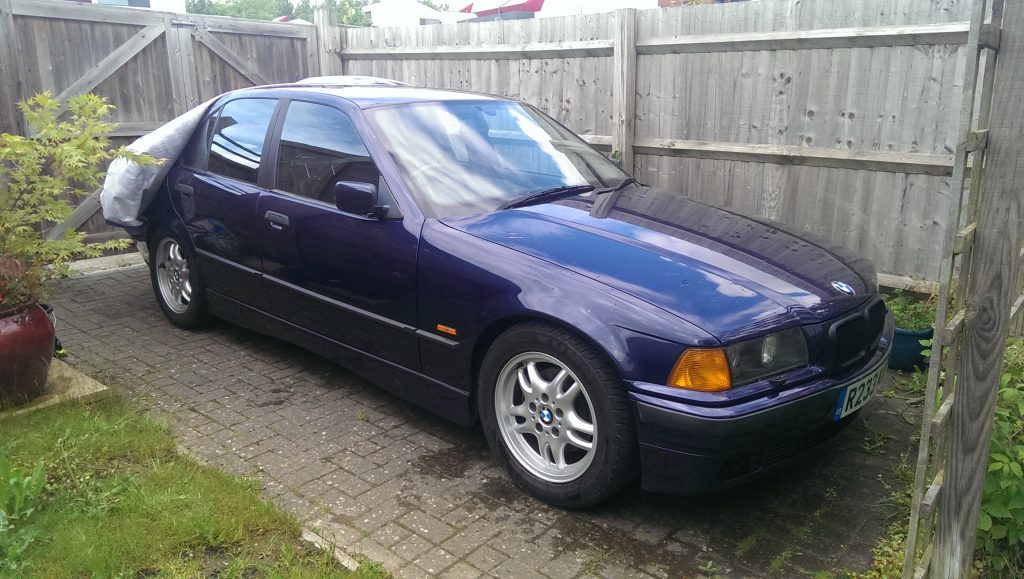 Now we were somewhat more fit for the next outing at Curborough sprint course near Lichfield. Time to see if I’d made the right choices…

PS. The air filter and ducting etc. do come, but not just yet, as I designed that heatshield for my E46 and it didn’t fit this car properly. Watch this space!