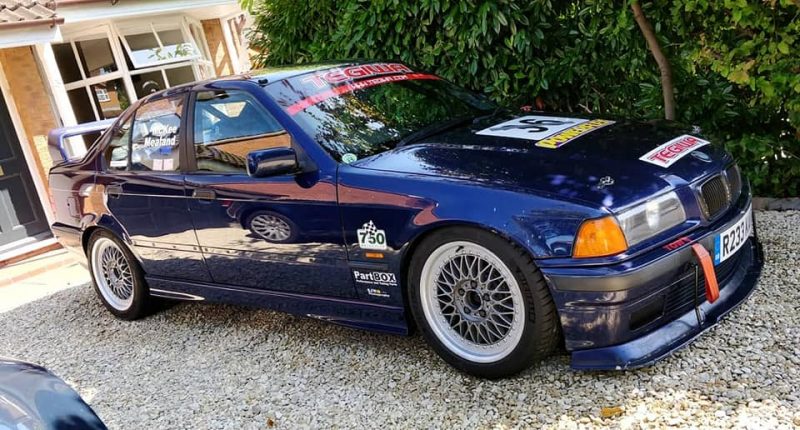 We are back. After six weeks the stricken E36 returned home from the bodyshop, and she’d never looked so good. It was remarkable how well such serious damage had been repaired, everything looked straight and fit perfectly. The only downside was that the new paint finish was so good, it made the rest of the car look a bit shabby!

Driving the car again after such a long absence was wonderful. I’d forgotten just how right it feels.. agile, urgent and alive beneath you. And it sounds so, so perfect. The acid test would be a geometry check, to make sure it really was straight – and the result was the most accurate setup I’ve ever had on the car. Fantastic news. All that was left to do was race it.. 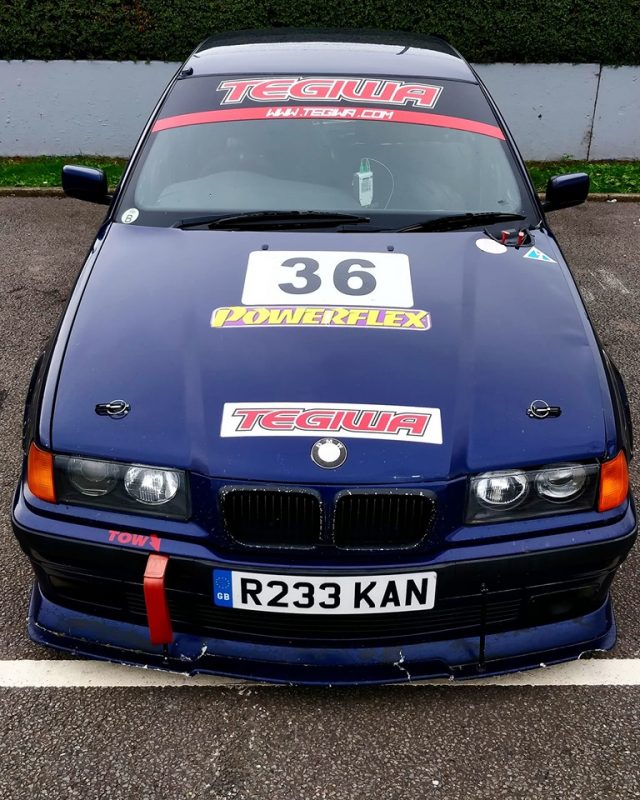 And to tell you all about that, we have another guest driver – the fifth novice racer to be strapped into this car. Iain Thornton made his debut in our comeback race at Donington Park, competing in 750 Motor Club’s Roadsports series. He was kind enough to put his own words to the experience.

“After a hiatus since the damage at Croft and plenty of blood, sweat and tears on Sam’s part, the 328i was back to race Roadsports Class C! For me it would be the start of my racing career, under Sam’s guidance.

I turned up to Donington at 8am on Friday the 6th to be greeted by a wonderful sight – a real race car with my name really on the rear windows! This was probably the most nervous I’d be all weekend, which is a real testament to the confidence the car would give me throughout the day. Sam and I chatted as he set up the car ready for the first test and he showed me around it a bit, telling me bits about it that I didn’t know. He chose a worn set of Nankang AR-1s for the test day, on the basis we would save the fresh ones for qualifying and racing. 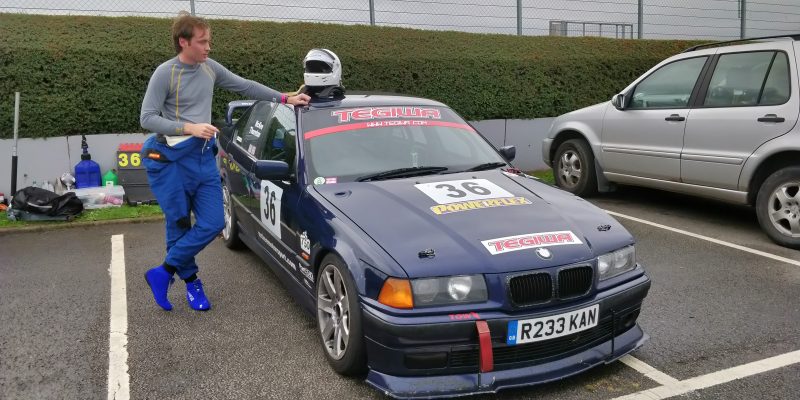 Before we knew it, it was time to get dressed for the first test session. Sam sent me out and timed me from the pit wall. It was a relatively slow session as a bit of a warm up, but lap times tumbled as the day went on. I came into the pits at the end of the session and reported to Sam that an indicator bulb had blown, judging by the fast flash. He pointed out that actually the whole indicator assembly had fallen out. Oops!

By the second session I had started to understand the car and circuit a bit better and things were really coming together. Sam kept asking how the car felt – I couldn’t find a thing wrong with it. I think he was just itching to get on track himself, but we needed him to coach me from the sidelines!

After the second session, the heavens opened so we retired to my car to sit, eat some lunch and chat about plans for the day. We agreed to continue with the balding Nankangs (despite having a set of wet weather tyres) as it would be a good chance for me to explore car’s dynamics in wet weather without pushing it too hard. As we discussed the afternoon and weekend ahead, we expressed pity for those who were getting soaked outside, such as the marshals and staff around the track. It was around this time that I realised that one sleeve of my race suit was stuck outside the car door, so with a sopping arm I headed back out on track.

I soon forget about the wet arm – this was the most tiring session of the day, requiring a lot of concentration. The track was sodden and grip was non-existent. The car was behaving very well, however. Predictable and easy to control. Sam continued to time and I was lapping faster than I had in the first session of the day, so there was clear progress. Again Sam was desperate to know if I had any car faults to report – the worst thing I could think of was a tiny wobble at cool down speeds, which I’m confident was nothing more than slight flat spots on the tyres. 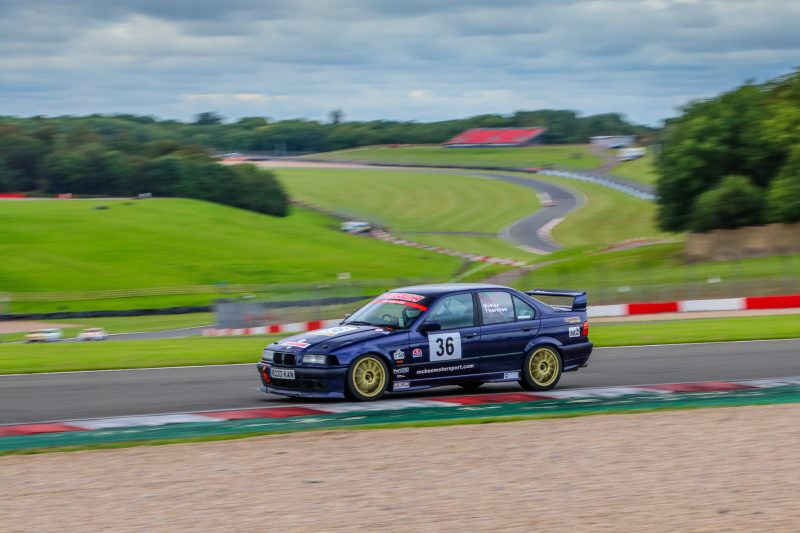 I had been struggling to do Redgate and Coppice quite right all day. Sam told me that I just needed to trust the car more – turn in harder and more decisively as it could do it. I finally built up to this in the fourth session – lo and behold, he was right. This final session was dry and the track had dried out, so it was a great opportunity to practise building pace again. I came into the pits at the end of the session to find Sam very, very pleased – my laps had been consistent, improving incrementally each time. This was music to my ears as I had made more progress in one day than I could have imagined and addressed something I’ve previously found quite difficult – setting consistent lap times. Now we had to be ready – whether we liked it or not – to qualify the next morning.

The car had been weighed earlier in the day, exceeding the minimum weight and when we presented it and ourselves for scrutineering, we all passed quickly and easily. It all seemed too easy! 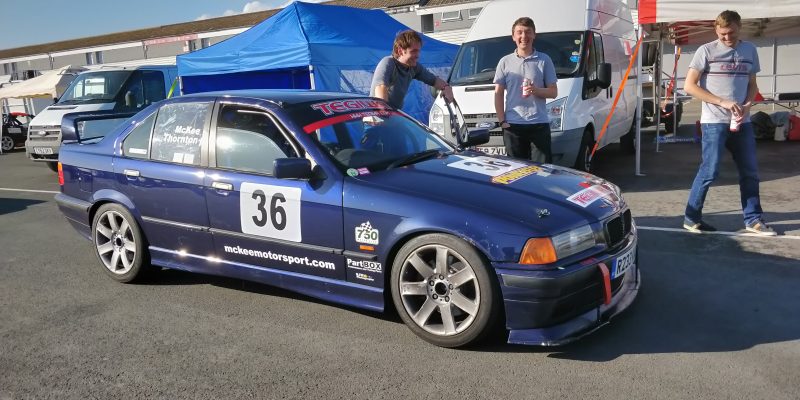 On Saturday we got to the track a couple of hours before qualifying started to check the car over and to swap to the fresh AR-1s I had been denied the previous day. We were greeted by a lovely morning – crisp but sunny and with the smell of petrol and oil from the V8 MGBs and Cs that were doing their qualifying session. The 328i was exactly as we expected – faultless and ready for us to hit the track.

Sam went out first and I prepared to take over. I didn’t realise that he only planned to do the three laps required for him to qualify to race. Despite putting in only the minimum number of laps and having driven for none of the testing the day before, his time put us 3rd in class. We thought that we had qualified 2nd in class, but then discovered that there was a car [Chris Morton, you git – S] missing from the live timing list due to not having a transponder. Oh well, we couldn’t be disappointed with 3rd! 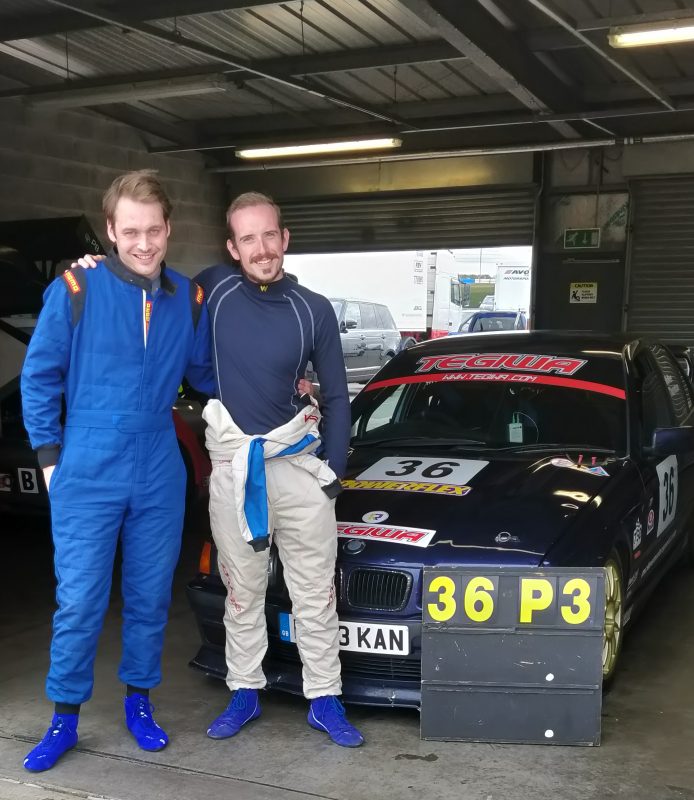 I went out with the goal of doing three laps so that I could race. All other considerations were secondary, so I started with three safe laps to get me race eligibility. After that I started to feel at ease and fell into a rhythm. I used the rest of the half hour session for more practice and somehow I managed to impress Sam again – my lap times were still consistent and still dropping!

My qualifying session was uneventful, for the most part, but it was invaluable for the experience it gave me before the race. Having dried completely overnight, the track was great and the fresh AR-1s were even better. I could scarcely believe the amount of grip I was getting and the way the front end was biting – it stunned me after the damp weather the previous afternoon. It would be in this session that I would decide I had finally conquered Redgate – my confidence there had been knocked by a spin in the third session of testing. 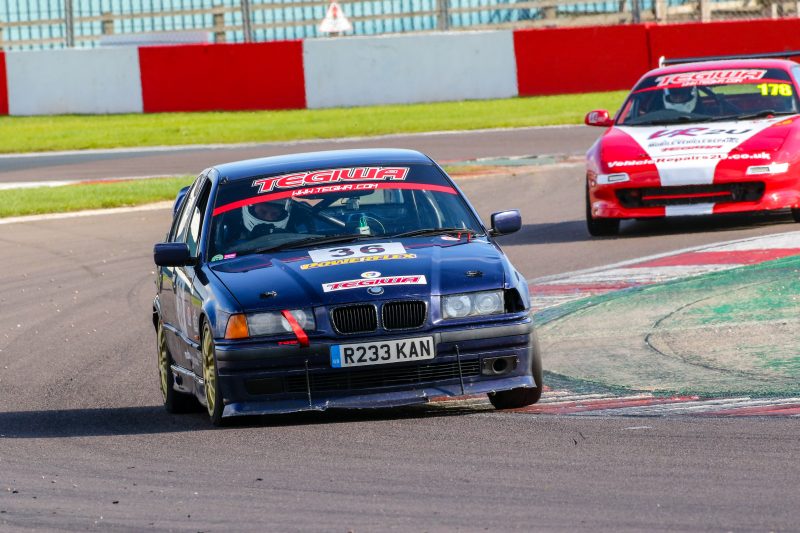 Sam used the time between the qualifying session and the race to thoroughly check the car again. Although we had agreed that it felt excellent, we also didn’t want to leave anything to chance. Everything had run like clockwork until that point and neither of us wanted that to stop. We practised our driver changes, which we were managing in 45 seconds – this left us a 15 second margin for error in the race as the car had to stop for a minimum of 60 seconds. Sam briefed me on what I needed to know about how we would handle pitting and anything I needed to know about the format of the race and the drivers’ briefing filled in the other blanks. At this point I simply couldn’t believe it – we were about to race!

As planned, Sam went out first and I waited in the pits for him. At Coppice on the first lap our streak of good luck ended – a competing BMW with dirty tyres slid into the side of 36, denting the driver’s door and sill. Despite being obvious, I wouldn’t find this out until the end of the race. I didn’t notice it as I got in due to the pressure of the situation! 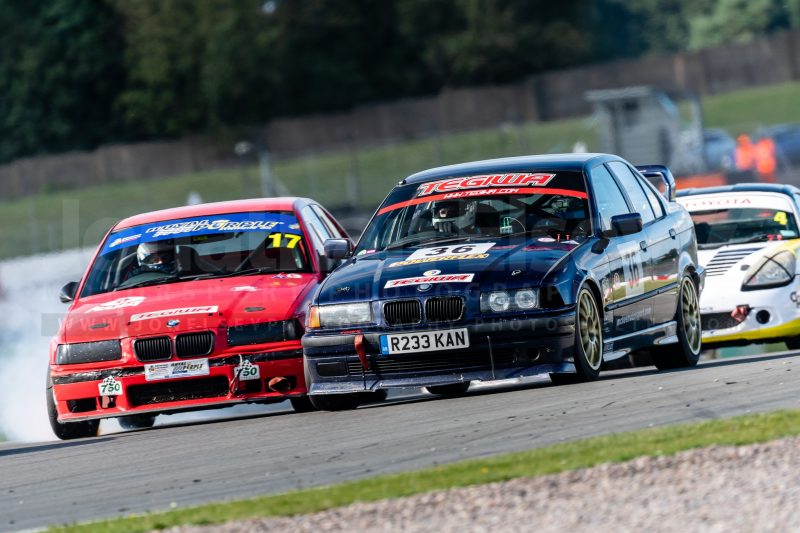 The race itself was marred by several periods following the safety car. Being inexperienced, I wasn’t ready for the sudden disappearance of the safety car and immediately lost several positions as it entered the pits. Never mind – I was determined to hold onto my new position the best I could.” 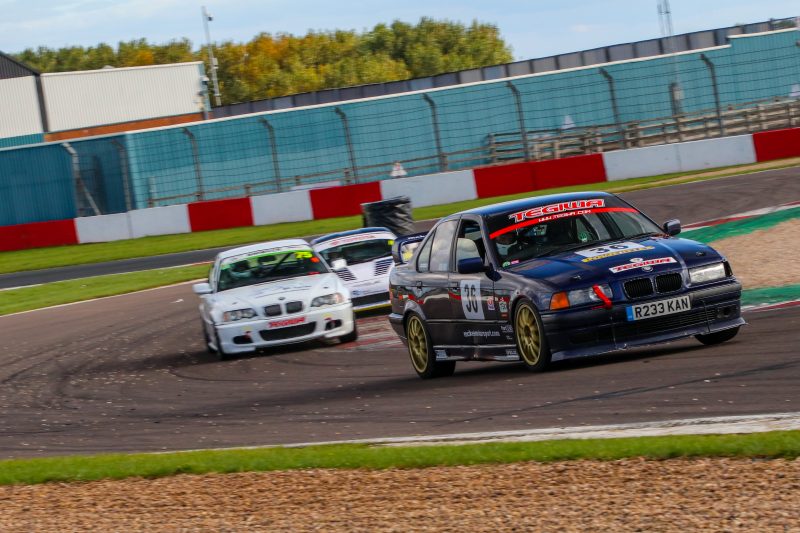 “Finally the chequered flag came and we had come 17th overall in a field of 40 and 9th of 17 in the class. Sam showed me the news on the pit board and I came in to be stopped by a very stern marshal who asked me to go to Race Control. I had no idea what the problem was but Sam filled me in on the accident. I was feeling guilty that stones had flicked up from the tyres of another car and chipped the windscreen and headlight, so it was a real shock to see the big dent in the sill from the incident in the first lap. Apart from this, we also had a 5 second penalty for breaching track limits, for which we took joint blame – luckily it didn’t cost us a place.

We had finished and I hadn’t disgraced myself! This was my main aim, and Sam had a final surprise for me. I had reached my target time of 1:25. Given that and the fact that we and the car had made it through the race and the car was not damaged beyond repair, we agreed that the weekend had been a resounding success. I’m very much looking forward to the next chance we get to do it all again!” 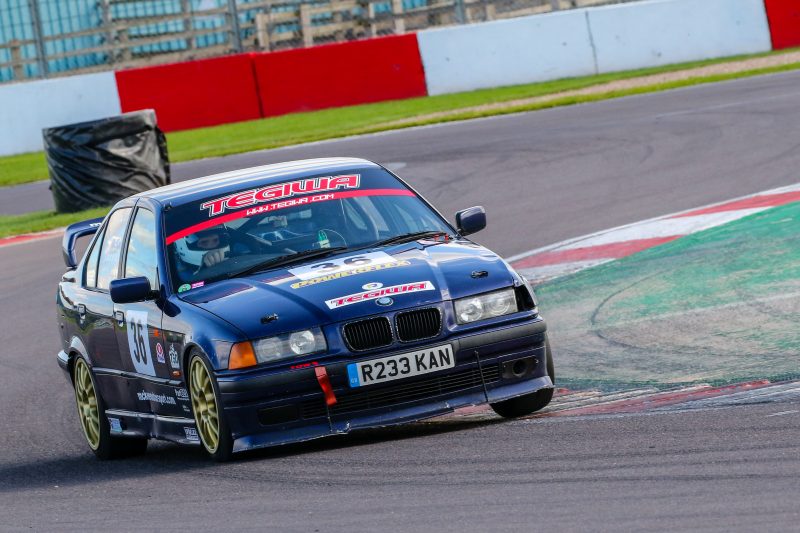