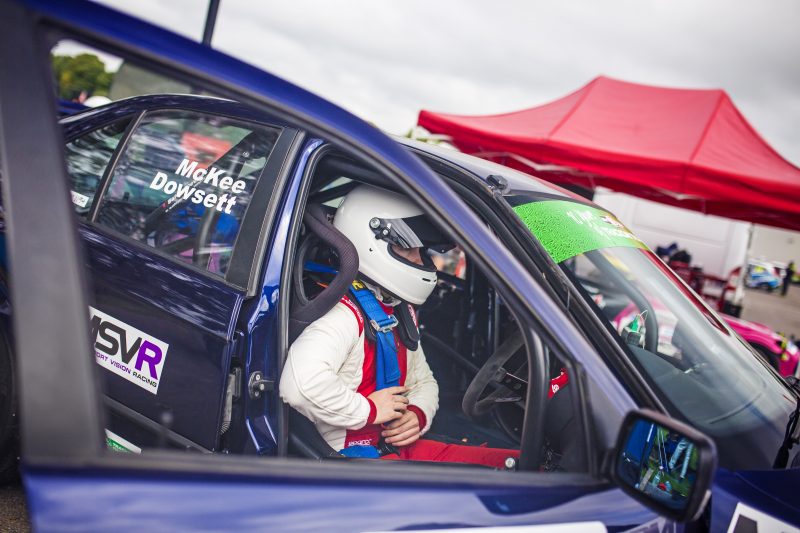 Every driver remembers their first race, no matter how many years ago it might have been. It’s a unique experience and often represents half a lifetime of hopes, dreams, planning and anticipation finally turning to reality before your eyes. I can recall nearly every minute of my soaking wet day at Donington on 18th March 2017, but I get to relive the feelings even more closely than that: I get to watch it happen for new drivers as they make their racing débuts in my car!

At Oulton Park on 8th August, that happened for Rob Dowsett. A regular Club100 kart racer and competitor in Javelin’s Sprint Series with his Toyota GT86 road car, he’s no stranger to racing or to driving cars at speed – but he had never before put the two together.

Nor had he ever visited Oulton Park, nor driven my car. We arrived on Thursday evening to walk the track before a full day’s testing on Friday, giving the best acclimitisation before the Saturday’s race. To say Rob was excited would be a significant understatement – he positively bounced out of his car and was immediately absorbing every detail of the venue.

I never know what to expect when strapping a brand new driver into my car, but my first impressions of Rob’s ability to visualise the right lines around the circuit and ask all the pertinent questions on the track walk quickly followed through into impressive speed. In his first test session he got a handle on the car swiftly, and by his second he was driving right up to my race pace from 2019’s Club Enduro round.

The day ran faultlessly as Rob clocked up 123 miles along Oulton’s twisting, undulating Tarmac ribbon. It often feels strange running the car all day and not driving it, but I didn’t go short of information: after each session, Rob was able to give me detailed notes on how the car was behaving and how his driving had developed through the day. It was a real pleasure to see his laptimes tumble, and to see his huge grin every time he stepped out of the car. 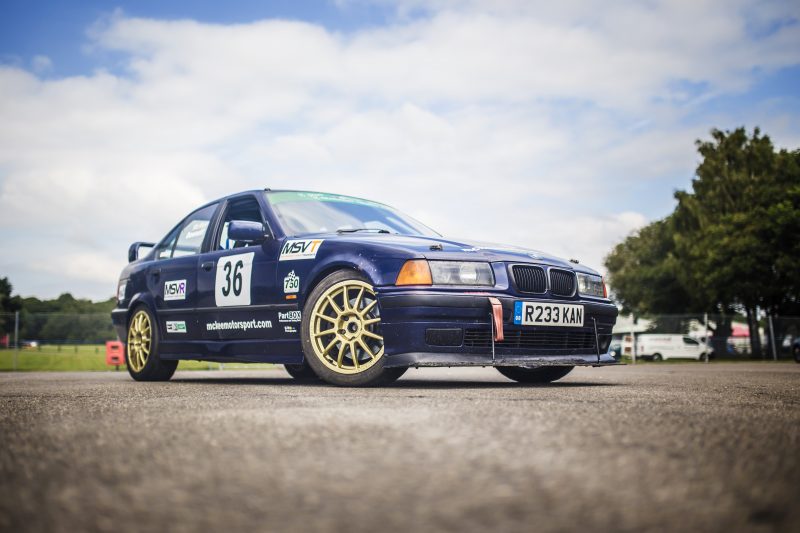 Race day dawned damp and drizzly for the second round of MSVT’s Trackday Trophy. I had never entered the car in this series before, its typical home being with 750 Motor Club. The format is a 45-minute race with a mandatory pitstop to be taken between 15 and 30 minutes, and the class structure allows for cars up to 175bhp/ton measured without driver. My car produces around 162bhp/ton by that metric – so while we didn’t expect to be left behind, finishing at the front was going to be a tall order.

As usual, I aimed to give my guest driver as much track time as possible. I went out first in qualifying to put in the minimum of three timed laps to allow me to race, then planning to hand over to Rob for the rest of the session. I found a circuit greasy but improving, and a car which thankfully felt smooth and consistent. It wasn’t without incident, though..!

An unlucky BMW suffered an engine failure and dropped a lot of oil on the inside of Druids, a fourth-gear right-hander which demands a lot of commitment on entry and gives little margin for error. An MX-5 and I were fortunate not to trip over each other as we both fell off the circuit! Completing the rest of my laps unscathed, I handed the car over and watched Rob fly.

By the end of the session, he’d put in two consecutive laps good enough for third place on the grid – and within two tenths of the fastest this car has ever been around Oulton Park. A stunning performance! 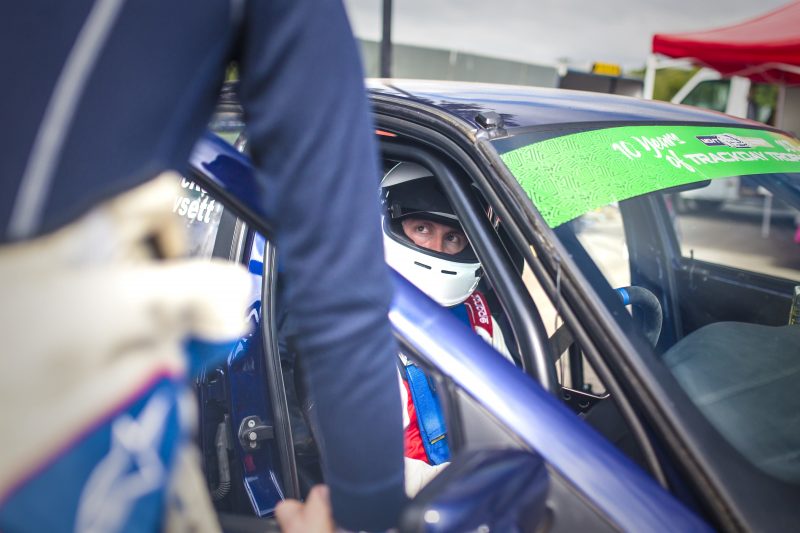 A five-hour EnduroKa race gave us a short gap between qualifying and race. Fortunately, a very healthy car needed only its brake fluid bleeding to have it as fresh as possible for the race. With that done, I talked Rob through the process for getting from the assembly area to the grid, how to approach the warmup lap and how best to launch the car. I left racecraft out, trusting in his years of karting to have already taught him what to do once the lights went out. 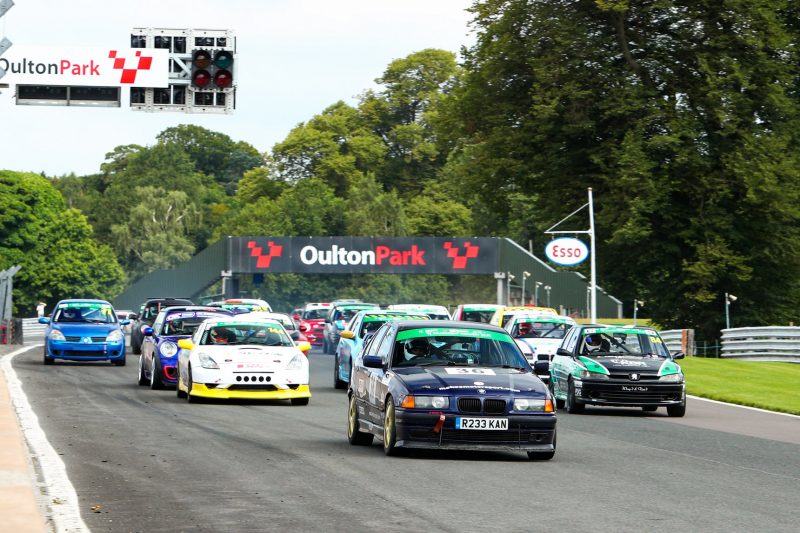 How right that was. Rob put in a superb start to hold his third position away from the grid, and after a brief safety car period was in the thick of a three-way battle for second place. I could scarcely believe the stopwatch on the pit wall: creeping into 2:01 laps around the 2.7-mile circuit, an 80mph average speed despite the closeness of the competition.

I was thrilled to see the car fighting right at the front – at this rate, all I’d need to do was bring it home. I called Rob into the pits after 27 minutes, checking tyre pressures and wheel bolt torques while he sanitised the car to let me strap myself in and go for my own slice of racing. 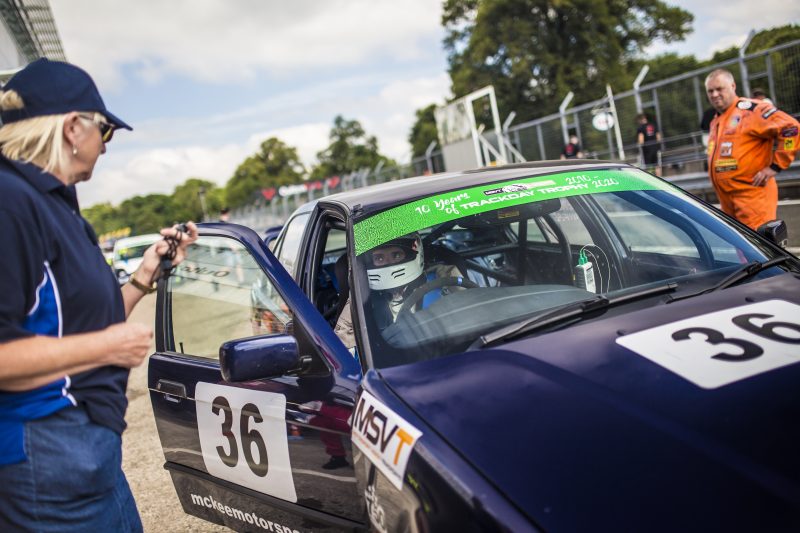 I love the bubbling adrenaline of rolling down the pit lane to rejoin the circuit, briefly reined in by the 60kph limit, feeling the engine’s muted howl through all my nerve endings as the car strains to be let loose once more. I cross the pit exit line, snap the throttle open and feel her surge forwards; pitch rising with my pulse. A right-hand curve on the inside of Old Hall, check the mirror as I join the circuit, take the line and we are racing.

I found a car that was hot after her two minutes standing, soaking in her own heat and brake smoke in the pits, but very driveable indeed. After a lap or two of feeling out the limits in each corner, wanting to waste no time but take no risks from fourth position, everything came together. The balance of the car felt superb, totally predictable and absolutely willing to work with me. I pushed on, the lap timer telling me I was into 2:01s as well, thrilled with the performance and the fantastic feel of the car. A yellow flag at Cascades and a Honda Civic stuck in the wall didn’t hold significance for me until I saw “P3” on the pit board – we had just inherited a podium position without needing to pass the unfortunate car ahead.

With five minutes to go, another incident brought out the red flags and the result was sealed – we had brought the car home third overall in a hotly contested field of 24 cars, despite being 15bhp shy of the class limit. I felt euphoric crossing the line, completing the final act of our outstanding weekend where everything had gone even better than we could have imagined. 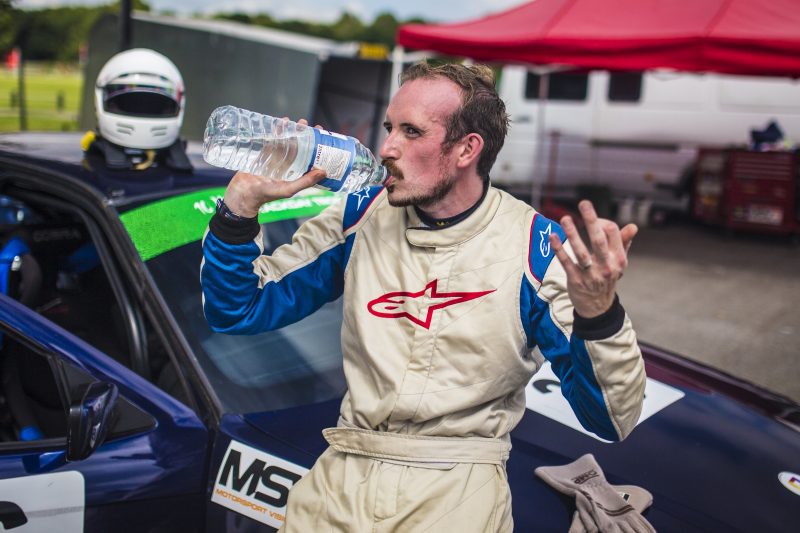 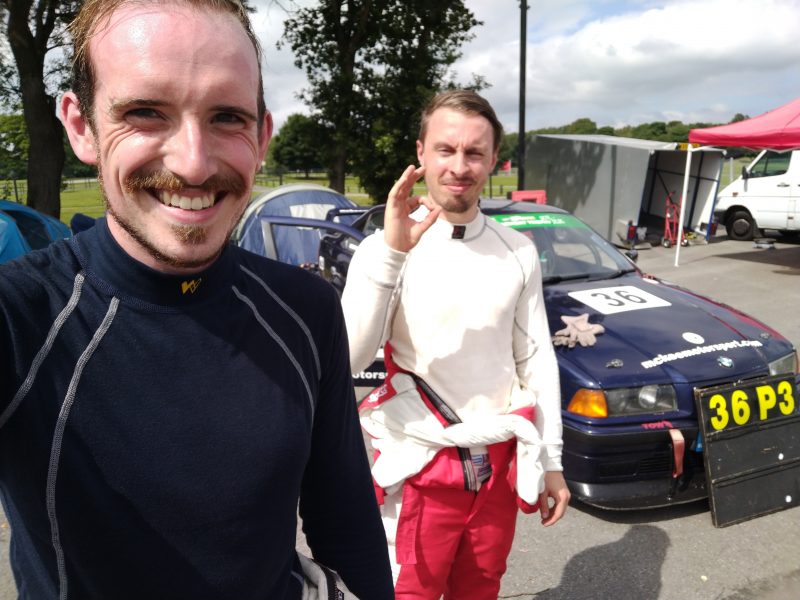 This kind of result was a fairytale: it felt surreal even to me, despite many a podium in my time. How must it have been for Rob?!

I’ll let him tell you himself.

“I had an open mind heading into my first race weekend, with my only objective to be as present as possible to make the most of the experience, as up until 2 years ago I thought participating in Motorsport was a pipe dream.

Thankfully this guy called Sam McKee exists and makes it possible to enter a race without having to sell an organ. Racing in a meticulously maintained and wonderfully set up BMW E36 328i makes for a very approachable driving experience that still feels extremely rewarding when you reach close to peak performance of the car. 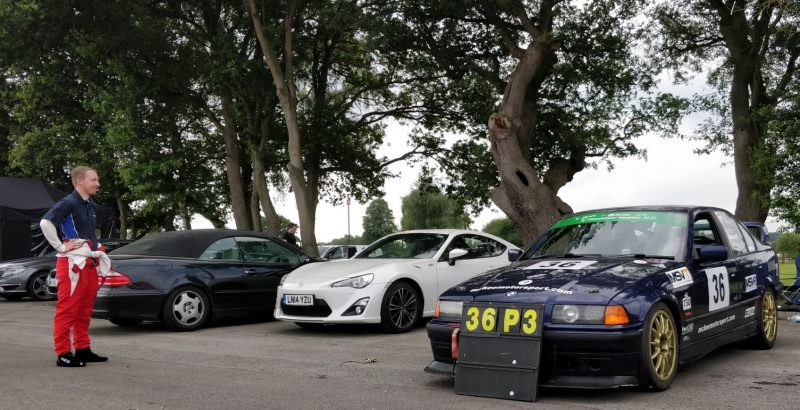 More impressive is sharing your first race weekend with Sam, as he made the whole weekend run like absolute clockwork, with every detail discussed, planned and executed seamlessly. As much as there’s plenty of opportunity to feel stressed or under pressure in an event like this, the environment with Sam is totally relaxed but still focussed, so I felt I got the absolute maximum out of my first race weekend experience that I could have, both on and off track, both on topic and completely off topic in our downtime!

Secondary to these factors is the matter that we managed to qualify P3 and finish there as well, which is just bloody marvellous and topped off a weekend that is a clear highlight of my life so far. So with everything that happened last weekend, trying to describe the emotions I feel thinking back to it is difficult to describe but the best word is just utter elation – and because of that, I am well and truly hooked and will be back for Round 2 later this year!” 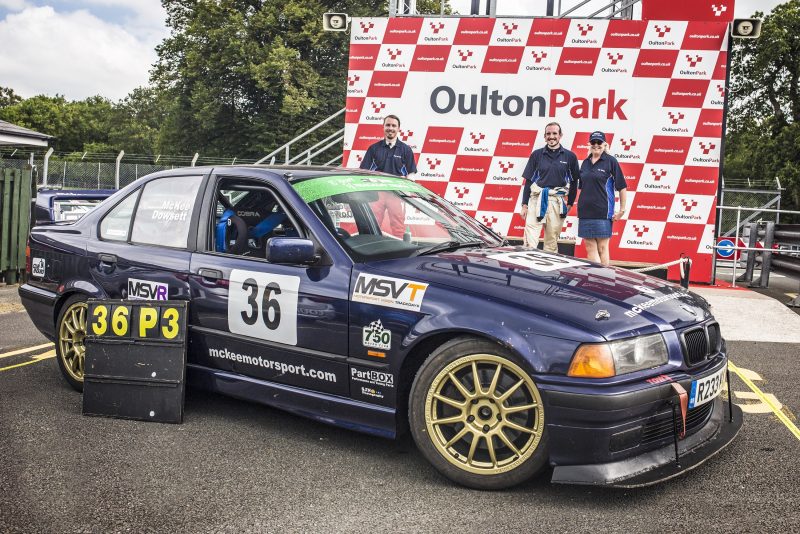 You’re welcome any time, Rob – the car and I will always be ready for more of that! 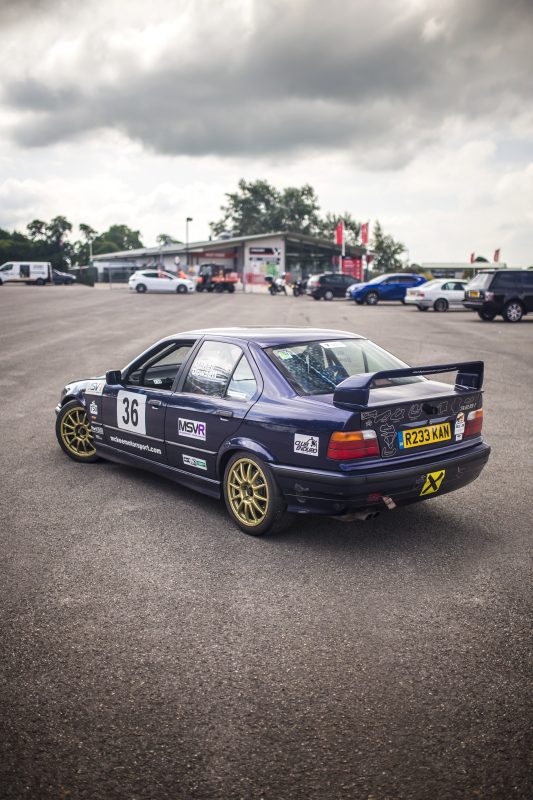