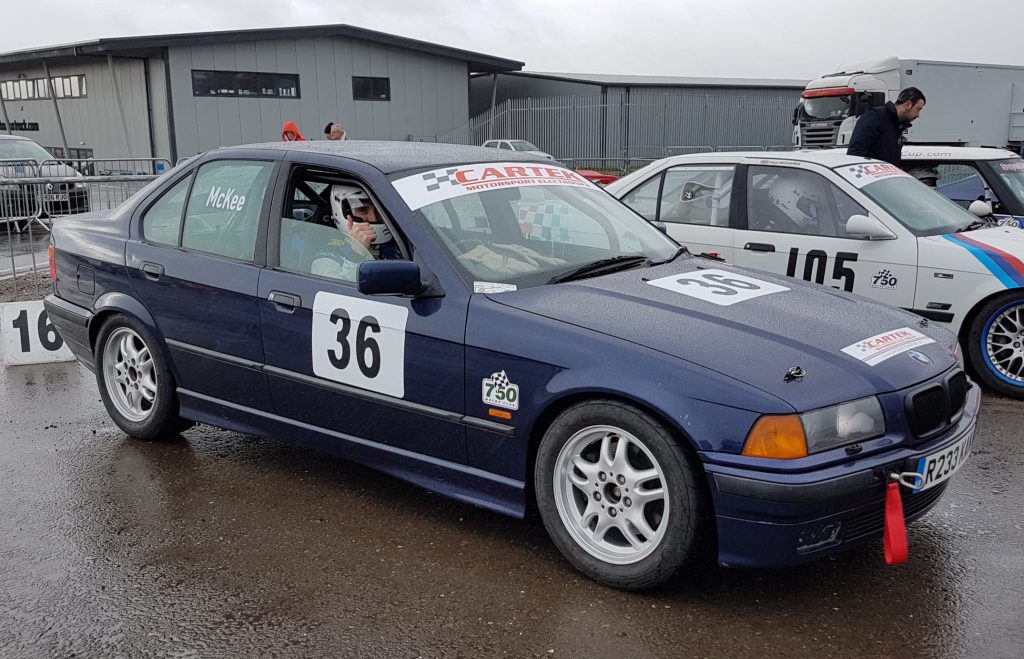 March 2017: The first race of the season was set for Donington Park’s Grand Prix circuit on Saturday 18th March. The run-up to the weekend was frantic with last-minute work on the car, making kit lists, and checking timings. As ever, all the little jobs ended up right at the end, culminating in applying race numbers in the dark on the Thursday night and devising a means of disabling the door locks (to guarantee marshals can get in from outside the car in case of an accident) with some self-tapping screws and a block of wood. One thing came out in my favour, which is that Donington’s a home circuit, being only an hour from home and fifteen minutes from my mum’s house, so I had a handy base.

The first hurdle is technical checks on the car. Called scrutineering, this process is required at every race meeting before the car is allowed on circuit, and all the safety equipment is checked thoroughly as well as selection of other items to make sure the car is in line with regulations. Your racewear is also checked for certification and condition. 750 Motor Club take some of the stress out of a race meeting by making scrutineers available the night before, so I got the car to Donington on the Friday afternoon to sign on for the meeting and get through the checks in advance – hoping to ease my blood pressure and give myself a chance of some sleep that night! The very friendly and helpful scrutineer found a few minor issues which I could resolve for the next meeting, but passed the car and my kit and issued the all-important slip: 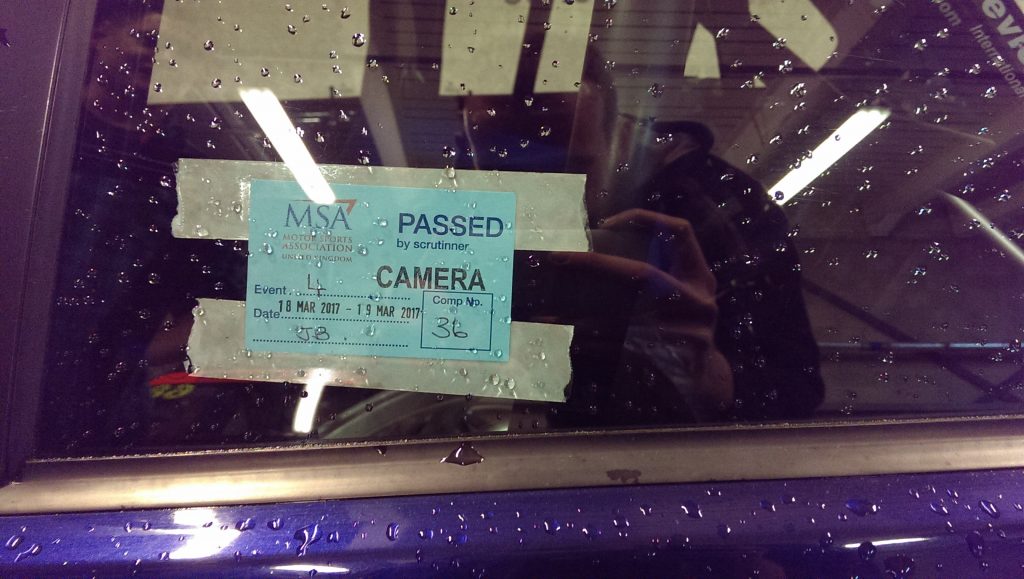 Once thus professionally mounted in your side window, the slip is your ticket past the assembly area marshals onto the circuit when your time comes. Another major advantage for the competitors in Roadsports was being assigned garages. Unlike British Touring Cars or Formula 1, a garage is a rare privilege indeed for a club racer, as there are typically several hundred entrants at every meeting but only 30-40 garages in the pitlane. Roadsports have the good fortune owing to the longer races – doing 45 minutes with a pitstop means we’re given garages in which to base our second drivers and any equipment we need in the stop, and give a consistent place to aim to stop the car.

So it was that Friday evening saw the car prepped, scrutineered and ready to race with all the club and series sponsor decals applied. I locked it up and left it until morning, getting a ride home with ever-generous friend Kevin who’d volunteered his weekend to provide his Mondeo estate and his spannering skills whenever required. 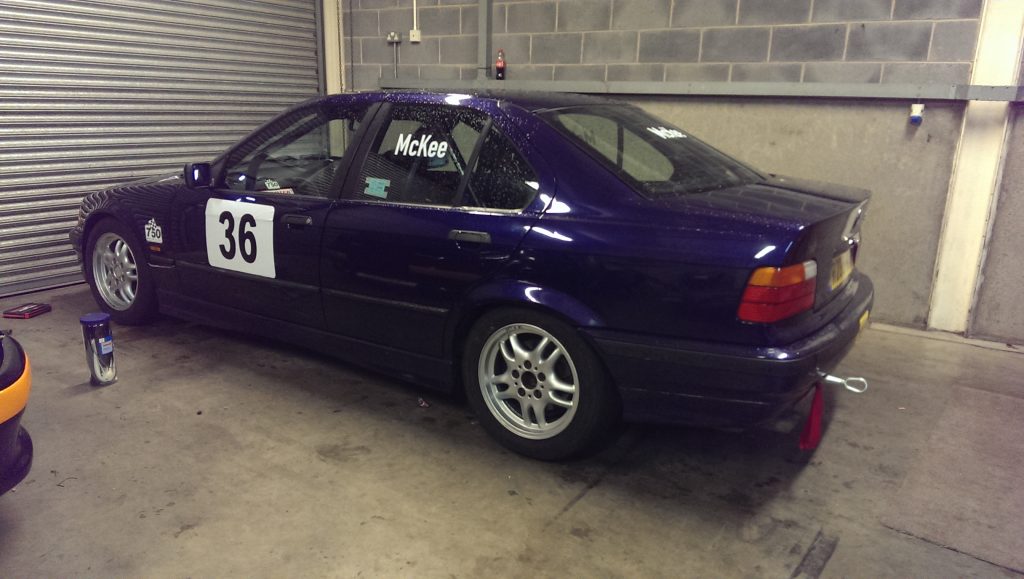 Amazingly enough, I slept well the night before the race. The comforting knowledge that the car was through scrutineering and safe in the garage helped immeasurably – the biggest fear is never having the chance to turn a wheel for whatever reason! But I knew that no matter what happened, I was going to be able to get out on the circuit at my first-ever race meeting.

The morning started early, as ever in motorsport, and damp as well! While in some ways I was pleased to see rain, as it’s a great leveller of car performance and leaves the laptime far more in the hands of the driver, mostly it just made me nervous as a wet circuit is deeply unpredictable and I didn’t have much experience in the wet. First up was the special briefing for those who had never raced at this circuit before, covering essential information such as the assembly area location, procedures for getting on and off the circuit (which are often totally different to track days), and special notes for areas of caution. The key feature was that there’s gravel everywhere here – and in the wet, it’ll trap you good and proper! 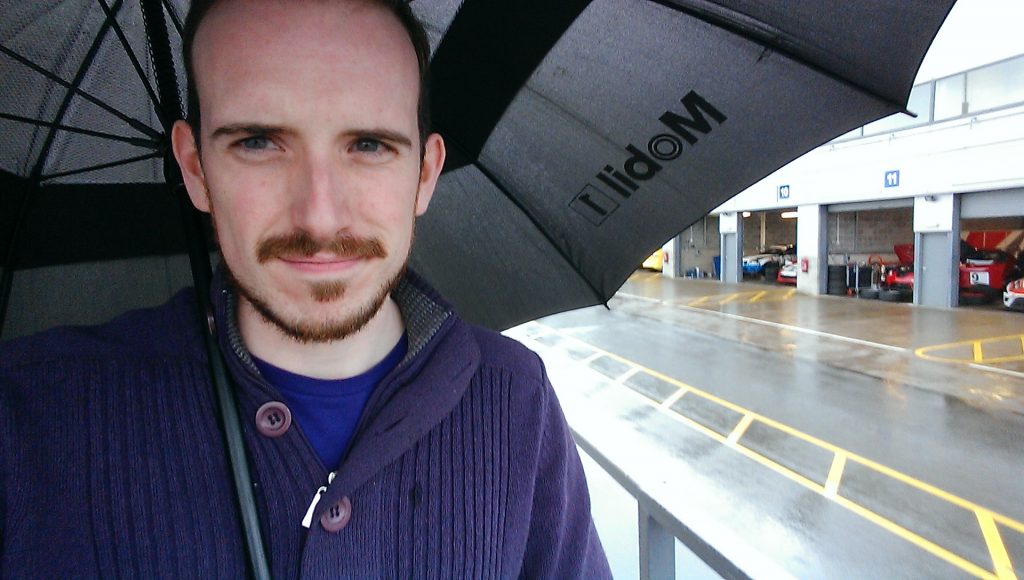 Next up was the practice session. Roadsports runs a 25-minute practice in the morning, which doubles as qualifying. It’s the only chance you get on the circuit before the race, there’s no other free practice or warmup beforehand because of the sheer volume of series and championships at each meeting – so you need to make it count. You have two jobs: complete three timed laps safely, which is the minimum requirement to qualify you to start the race; and try and set the fastest time possible, as the cars are put on the grid in order of laptime from this session. It’s usually best to treat these tasks separately – get your three laps done while taking it relatively easy, feeling your way around the circuit, making sure you stay on the black stuff and then once you’re qualified, start to build the pace to a laptime.

Before going out on circuit, you’re called to the assembly area. Here all the cars in your session wait until the previous championship have finished and freed up the circuit for you, and the wait feels agonising. You have all the time in the world to worry about temperatures, torques, tyre pressures, suspension settings.. all while already strapped into the car and too late to do anything about any of it! 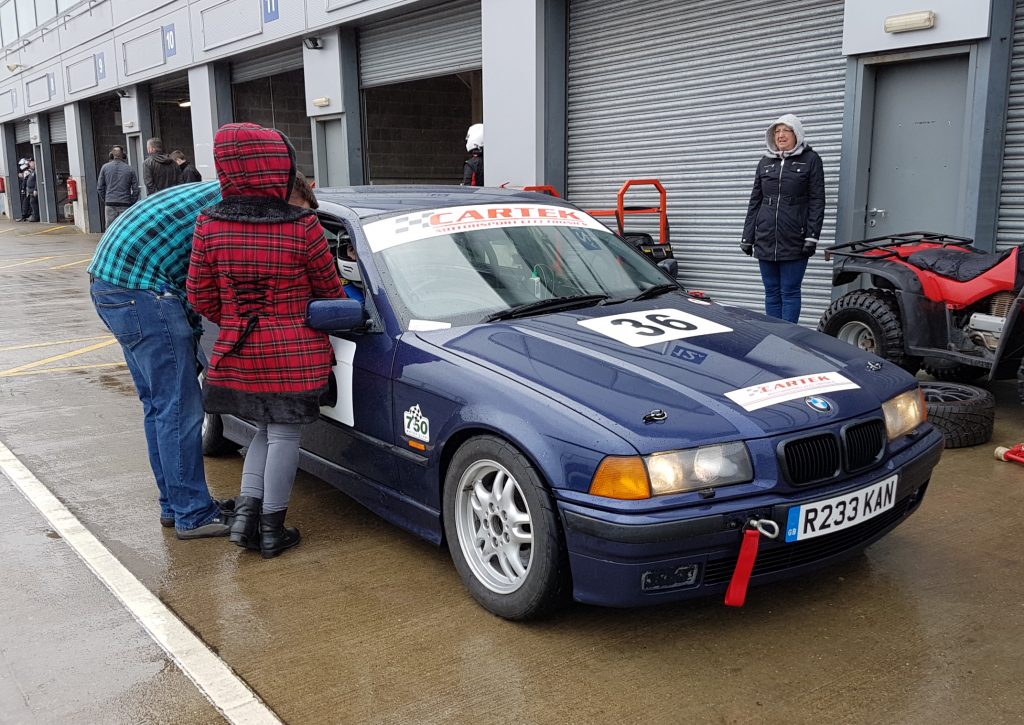 Going out into my first live session at a race meeting, in the wet, with 38 other cars sharing the circuit – 35 of them with significantly more power! – was an eye-opener in the extreme. Unlike a track day, there are no courtesy rules for overtaking or proximity to other cars, and in appalling visibility everyone was immediately right on top of me. The only way was to carve myself some space, try and feel where the grip might be, and get some safe laps done. Quite a few cars fell off the circuit, highlighting the treacherous conditions, and caused a long yellow flag period. I came in the pits once so Kevin could check tyre pressures and I could have a quick word with the rest of Team McKee – fiancée Emily and mum Joy! – before heading back out. Here’s how it looked:

After that run, I was astonished to find that I’d qualified 22nd overall of 39 cars, despite being one of only five cars in the bottom Class D. I was also the fastest of four 328is in attendance, with all the others being in the class above. This was such an encouraging result – not only had I survived my first live session and qualified to enter the race, I’d set a solid laptime and put myself mid-pack on the grid. The worry was that the rain was still falling, and I had a huge number of much faster cars starting behind me and wanting to get through… 2:05pm would bring the race start.