It seems strange that we should reach late August before entering the first round of 750 Motor Club’s Roadsports series, but such is the way of 2020. That belated season opener brought us to Silverstone’s International circuit, which neither I nor good friend and returning E36 racer Iain Thornton had driven before. Some testing was in order.

We arrived in the bafflingly tiny International paddock on the Friday morning before Saturday’s race, each with two half-hour sessions booked. Mine would be used to puzzle out how the car was handling and identify any changes needed; Iain’s would be to learn the circuit and reacclimitise himself to a car he last drove a year ago at Donington Park.

Whatever Silverstone used for their track surface, it wasn’t happy that weekend. I was relieved that other drivers were also finding it very slippery despite the apparently ideal conditions of cloudy, dry and low-twenties temperatures. The car felt very “loose”, tending to oversteer mid-corner and more heavily at exit of the almost exclusively right-hand bends of this layout. Even the usually stunning braking performance seemed lacklustre thanks to the low grip of the circuit and we both felt dissatisfied by the day’s running.

Race day dawned bright and sunny with the wonderful atmosphere that accompanies racing with 750MC. Friends old and new stopped by the garage to catch up, take a look at the car in its latest trim and wish us well. It was hard to feel any less than optimistic as we went into qualifying and tried to find some space to set a laptime among the near-capacity field of 47 cars packed onto International’s 1.85 miles. 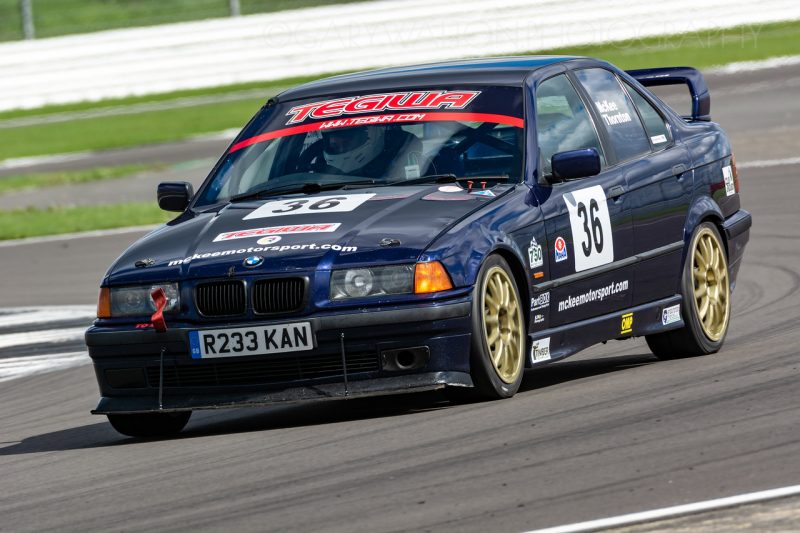 I went out first, aiming to complete my minimum three timed laps before handing the car over to Iain for the remainder of the session. As it turned out, I needed one more to be totally happy! A small mistake entering The Link a little too slowly cost me valuable pace down the Hanger Straight on my third lap, but I was much more satisfied with a 1:21.49 on my fourth attempt. I got out to find us lying second in class with 10 minutes still to go.

Iain drove well, putting in consistent times near his best testing pace and came back in the pits smiling: “I’ve got my mojo back! That felt much better. I think we’re gonna have a good day.” Relief and smiles all round as we checked the car over and settled down to watch some racing before our turn would come at 2:10pm. Other competitors had improved towards the end of the session, but we still landed fifth of the 14 Class C cars on the grid: a strong result. 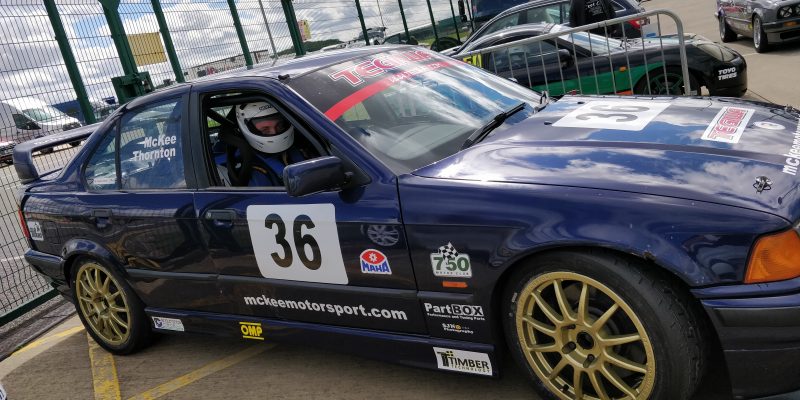 Iain would start the race right in the thick of the action, 26th overall of the 43 cars which made it to the rolling start. Ahead, a Porsche 968 Sport and a Renault Clio 200. Behind, a Toyota MR2 and a Caterham 7. Such is the fabulous variety of the cars in Roadsports, all making their laptime in very different ways!

He got away cleanly and was immediately trading places with the #4 MR2 of Peter Higton, the two cars working their way up the field together as they battled. It was a pleasure to see the E36 arriving into view around Club corner right on its toes, with varying amounts of opposite lock in play as Iain pushed ever harder to maintain his momentum. The laptimes were great, quicker than he’d driven all weekend despite the pressure and compromise of busy race traffic.

Then a rare thing happened: the safety car appeared at exactly the right time! We had planned to let Iain race for as long as possible, up to the end of the “window” in which we had to make our mandatory pit stop. That meant I would get in the car just before 30 of the 45 minutes’ racing had elapsed. No sooner had I hung out the pit board telling Iain he had one more lap to go, than the #2 Porsche Cayman of Bradley Ellis & Leonzpas Loucas had a dramatic tyre blowout and beached itself in the gravel before Stowe corner. With the stricken car sitting right at the fastest part of the circuit, there was no choice but to bring out the safety car to allow it to be recovered. Everyone in the pit lane burst into action: making your stop while the field circulates at reduced pace is a major advantage. 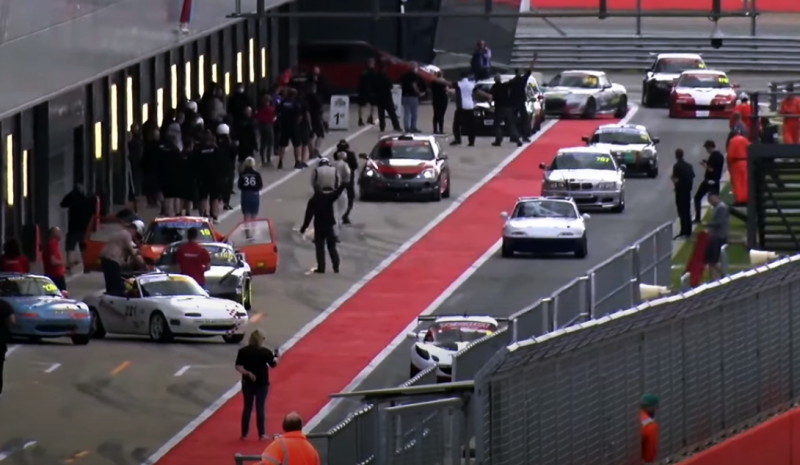 Iain threaded the car through the teeming pit lane for a 90-second pit stop; the mandatory time increased by half a minute to allow the departing driver to sterilise the car’s controls before the next occupant gets in. It made for a relaxed affair. I was strapped in and ready to go with plenty of time to spare, Iain assuring me everything on the car felt fine while Mum counted down the seconds before releasing me back into the race.

This time, a less thrilling opening of proceedings as I caught back up to the train of cars behind the safety car before watching, lap by lap, the marshals extricating the sorry Porsche from the gravel. The green flag came out with fifteen minutes to go and finally I could do some racing.

A mid-race safety car always plunges everything into disarray: with competitors pitting at different times, it’s very hard to know whether the car in your mirrors is far behind, battling you for position or in fact a lap ahead and not concerned with you at all. Unless a rival was obviously far quicker, my solution was to fight for every single spot while keeping up as strong a pace as possible. We wouldn’t know our position until the end, but in the meantime I was going to push! 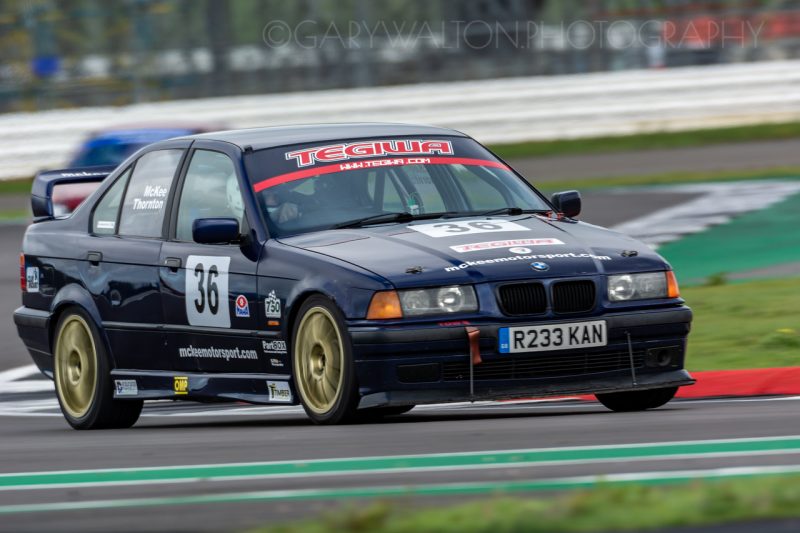 After nine laps of some pretty entertaining traffic management, trying to use both quicker and slower cars as chess pieces to pick my way forwards on the busy circuit, the chequered flag came out. I crossed the line 18th of 43 overall, six places up from that strong qualifying result. It put us seventh in Class C and, while far from the podium we’d hoped for before the meeting, we were really satisfied with our performance in surprisingly tricky conditions.

It marked Iain’s sixth race finish from six starts, not only testament to his dependability but also the end of his days as a “novice”. Six finishes makes him eligible for the Race National licence and means he no longer has to display the black cross on the back of the car, so there was more work to do after the race! 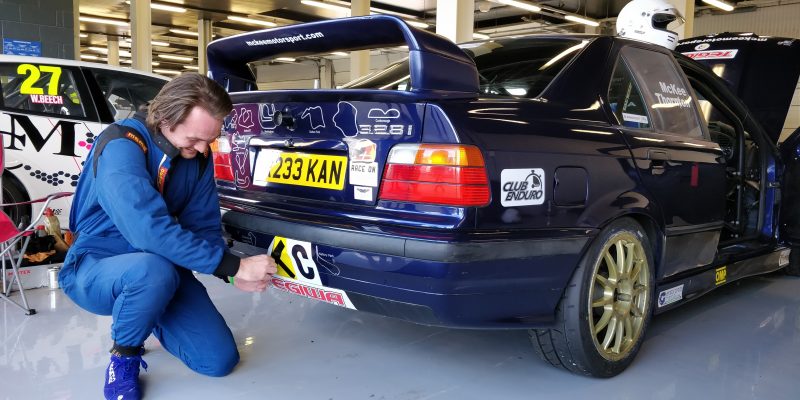 Sadly, the ongoing restrictions in Wales meant that the following Roadsports event – scheduled for 12th September at Anglesey – has been cancelled. There’s still more to come in the E36’s September, though.. Watch this space for another new racing driver.