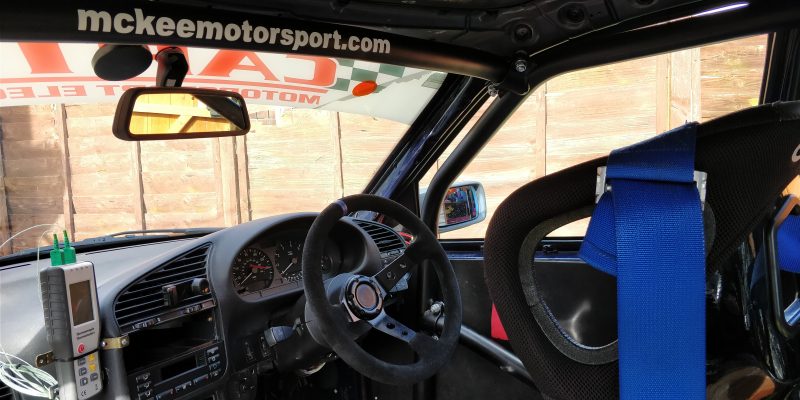 Not a moment too soon, the car is ready and our story comes up to date. A few finishing touches were still being made on Friday morning before I headed to the circuit for the first race of the season. It felt great being back in the paddock, and even before that driving the car to a race meeting has a nice sense of purpose to it. It seems to be attracting more attention with its aerodynamic appendages, too – I’m sure more kids point at it than before! I got signed on for the meeting and went down to scrutineering, getting chatting to a gentleman racing an AC Cobra-looking machine with a 7.0 V8 producing 657bhp. The car weighs 1100kg. Such is the insanity of the wonderful Bernies’ V8s series! 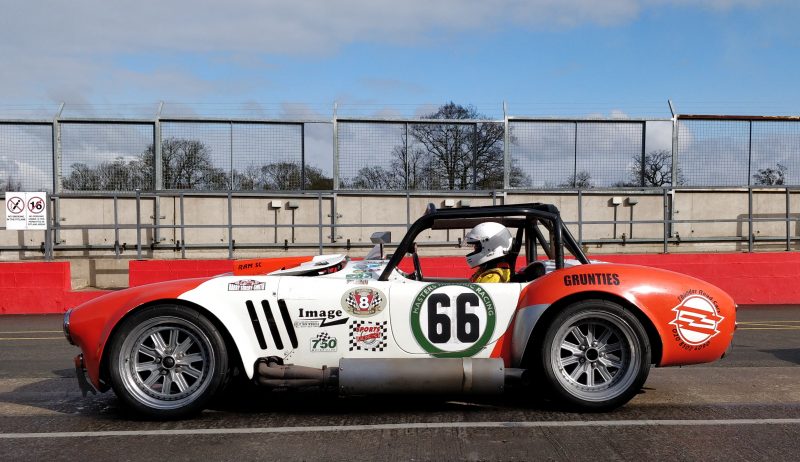 As usual, the car passed scrutineering without a hitch. Even when you’re happy with your preparation and not expecting any problems, it’s always a sigh of relief to find you haven’t overlooked anything! I got myself set up in a garage, and immediately found my shopping list expanding, as I was sharing with Imran Khan’s very serious 328i coupé. Running at the front in Class B, Imran was all too happy to show me how you get one of these cars down to 1090kg with half a tank of fuel on board, and making 260bhp to boot. Nothing like realising how much work you have left to do than being presented with the same car, but 130kg lighter! 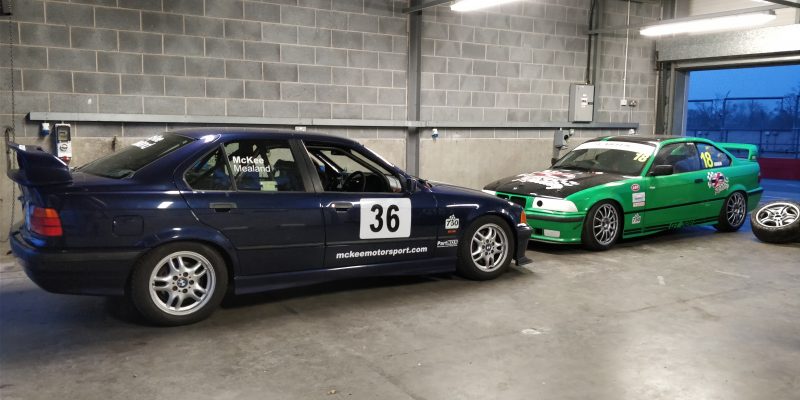 Leaving the circuit for the night, it still felt like beer garden weather, so it was hard to take any sensationalist reports of the notorious “Beast from the East” returning very seriously. But man alive was it cold when I went back in at 7:30, with snow flurries dropping every half hour! Nothing settled on the circuit, so we didn’t worry and I got the car set up for qualifying. By 10am we already had a remarkable support force of friends and family, despite the cold, and were feeling ready to see what we could do on the track. Here’s the qualifying session:

Astonishingly enough, what we could do was place third of the ten cars in Class C. This was a far better showing than I’d expecting, knowing we were making a big leap up to this class and that the car was well down on the power-to-weight limit. Despite the sub-zero temperatures, the car felt great on its Nankang NS-2R tyres. I was very pleased with the 1:55.19 we clocked up, and with Adam’s performance on his very first sight of the Grand Prix loop – we’d only been able to test on the National circuit. We’d sit 22nd of 36 cars overall. 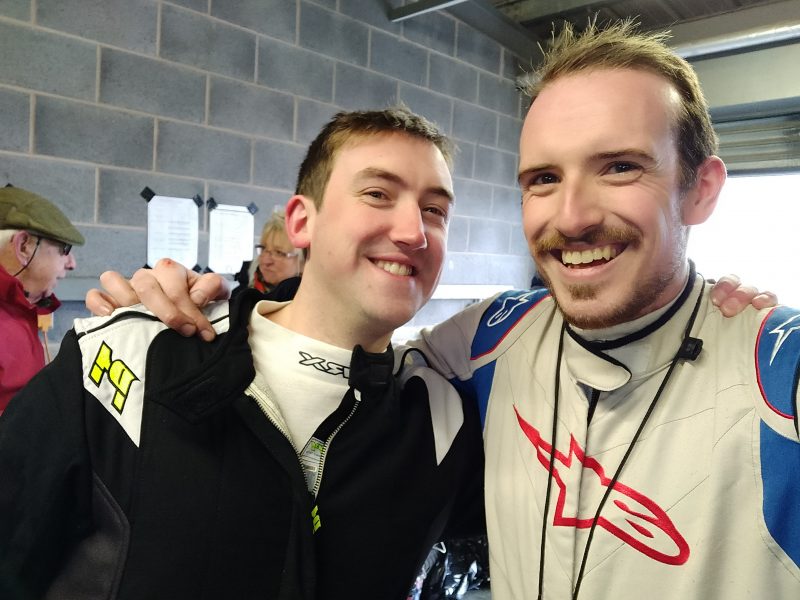 Some race schedules leave you a long gap between qualifying and race, but we had only two and a half hours to wait – barely enough time to worry after we’d gone to the drivers’ briefing, had some lunch and refuelled the car. Perfect. Things started to go a little awry as the next session was delayed and cars held in the assembly area while another snow flurry blew over, though. Rather than send the cars out, an early lunch break was called, through which we could hardly say the weather improved… 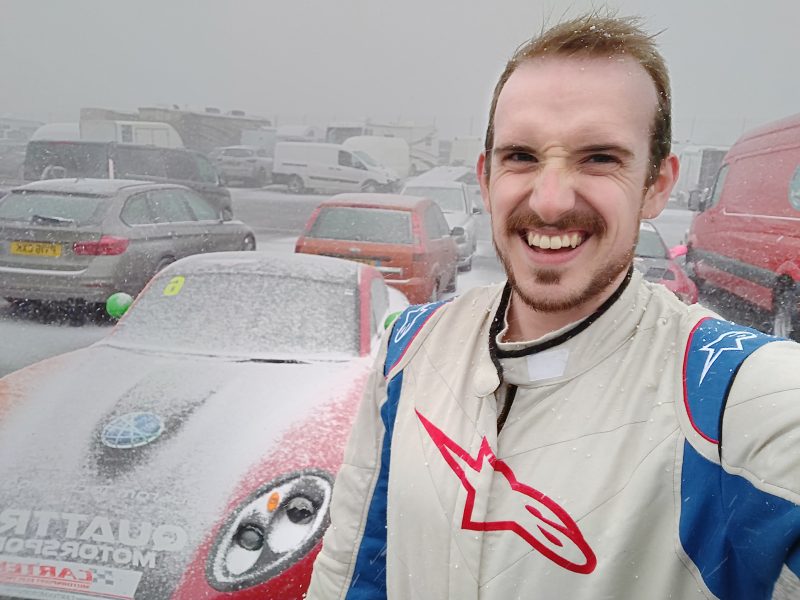 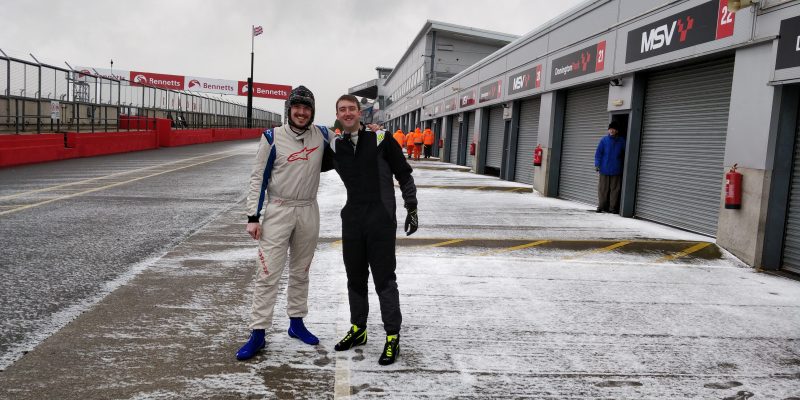 But, as snowy as the pitlane and car park looked with nothing moving, the track surface was clear and we were itching to get out and race. We filled the time by making yet more tea and triple-checking everything on the car, the garage full of a dozen expectant supporters. 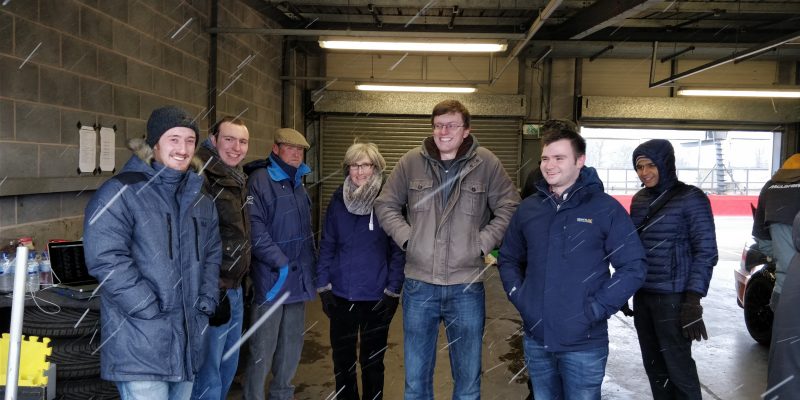 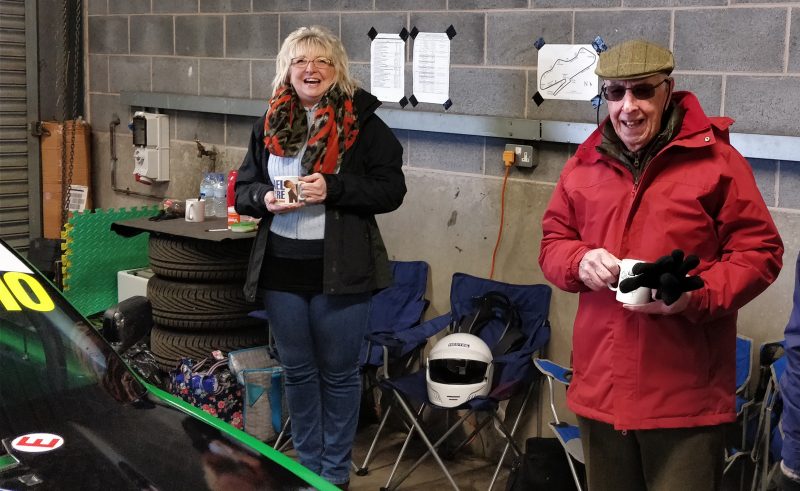 It wasn’t until Andy Marston and Brett Evans switched their Class A M3 over to full wet tyres at around 2:30 – half an hour after our billed race start – that I felt moved to go and have another look at the track surface. I got on the pit wall just in time to hear commentator Josh Barrett announce that the entire race meeting was being abandoned, Saturday and Sunday, with no prospect of any cars going out again that weekend.

The sense of deflation was profound. All that rush and prep and nerves and buildup, but no chance to go out and race. I felt worst for Adam, who’d got himself properly psyched up for his first-ever race to then have to go through that process all over again for the next meeting – closely followed by his parents, who’d travelled down from the Scottish border! It was a real shame letting down all the family and friends who’d come out to support us. The only thing to do was pack the car up and call the post-race BBQ early – and indoors – and get everyone back home and in the warm. 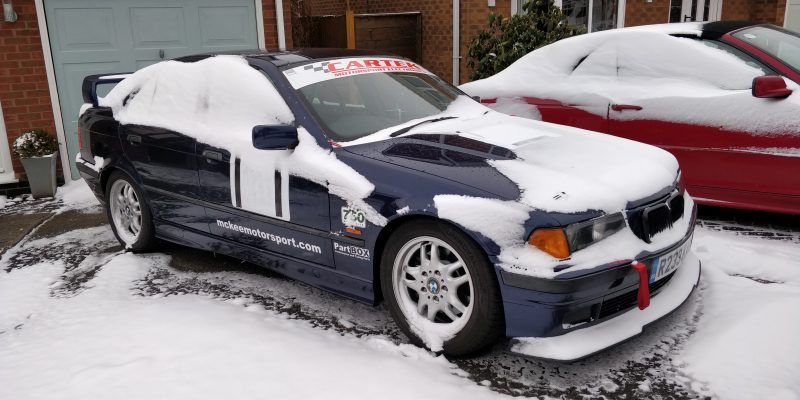 Thank you to all the friends who came to Donington – your support meant so much to us, it was a real boost having you along, and if you’ll brave it another time your tickets are on us. That means you, Sav, Shiv, Calum, Jack, Adam and Jack!

Next stop, Brands Hatch. It had better not snow in Kent in mid-April…