“Yeah, I think it went alright!” 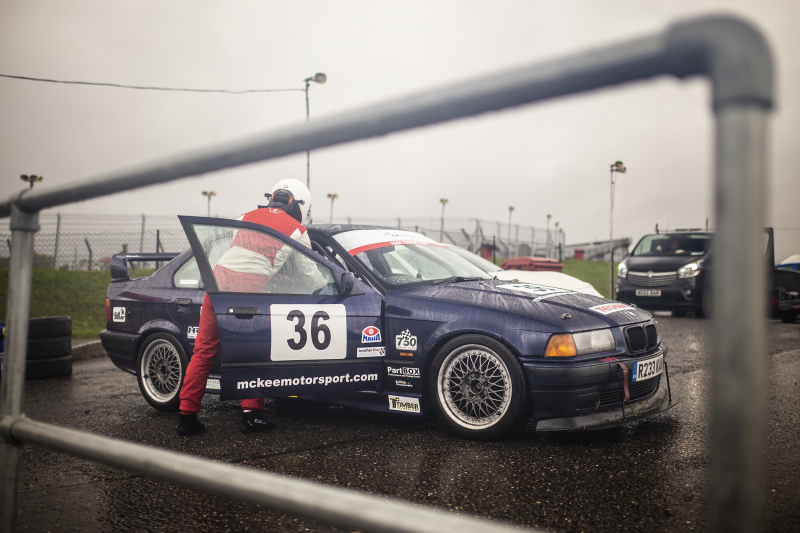 Rob Dowsett’s first race at Oulton Park back in August, where we took third place overall sharing this very car in MSVT’s Trackday Trophy, was supposed to be his toe dipped in the high-octane pool of circuit racing. One outing to get a feel for things ahead of making plans for next season. I’m sure we’ve all set intentions like that in one way or another..

..but only days after such a fantastic experience of racing and a superb result,  I had a message pondering whether there might be another chance to get out this year. A Trackday Trophy round presented itself on Hallowe’en at Rob’s home circuit of Brands Hatch, we were both available, and that was that. We duly arrived at the circuit on Saturday morning for another shot at the familiar 45-minute race format.

You can watch the highlights of the meeting right here:

Our previous outing had been bone dry throughout, but the radar promised something quite different this time. A truly enormous weather system marched inexorably towards the 1.2 miles of Kentish asphalt, and the only question was whether the clouds would burst before qualifying or after. It wasn’t cause for concern: this car is typically strong in the rain and, despite Rob only having driven it in the dry, we both felt happy tackling challenging conditions. So much so that we’d prefer they didn’t arrive until the race – so nobody got any practice!

When we were called for our session, it still looked like the weather would hold. We kept the dry tyres on, Nankang’s excellent AR1 semi-slick, and got over to the assembly area as early as possible. The plan was simple: I would go out first and set a laptime immediately, with the rain arriving right behind me and rendering the rest of the session academic. I’d then come into the pits and hand over to Rob for him to familiarise himself driving the car in the wet, knowing we were on pole and couldn’t be beaten. Easy. 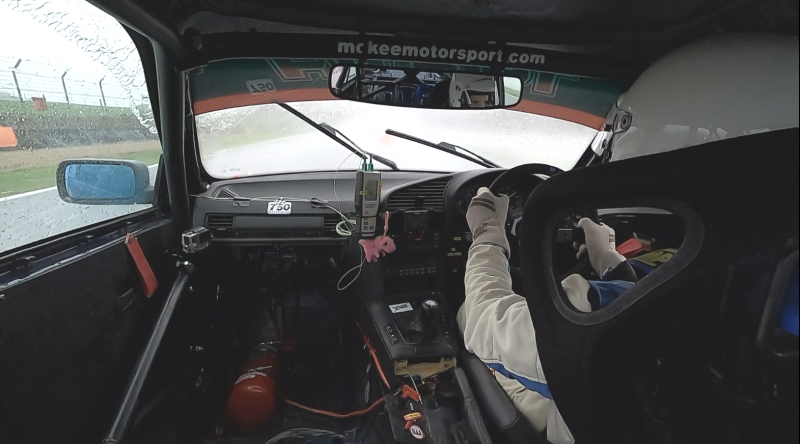 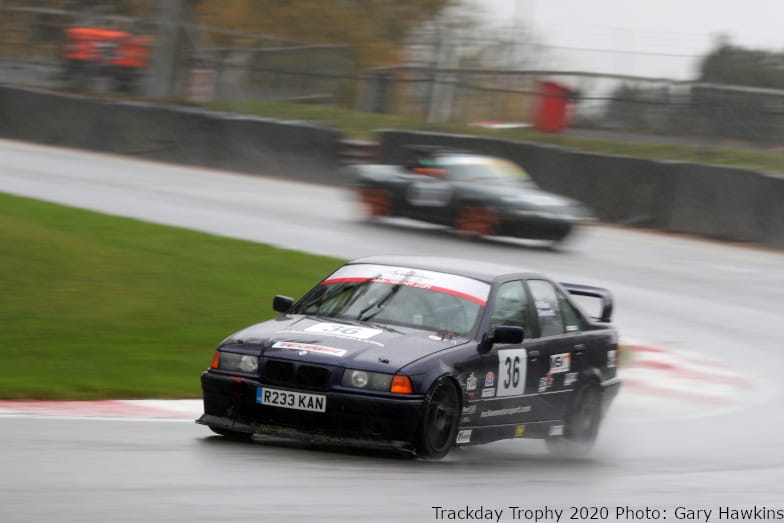 Best laid plans, and all that.

I got straight out onto a clear circuit alright, but the heavens had already opened and the very short lap of Brands Hatch’s Indy circuit meant that when I came around for my first flyer, cars were still joining the circuit from the pit lane in front of me and the spray alone made it difficult to pick a way through. The dry tyres were already very plainly not the right choice! The car was driveable, but not enjoying the conditions and requiring real care on corner exit. I put in a lap good enough for third place, fell off the circuit for a brief excursion at Surtees trying to better it, and decided discretion was the better part of valour. I brought the car in to hand over to Rob, complete with ornamental flora. 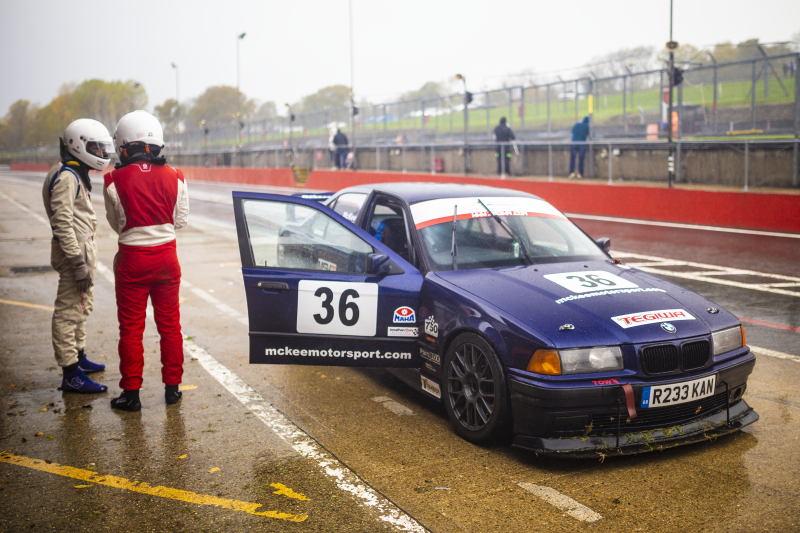 “Just survive,” were my words to Rob. “Go out, treat it like ice, do your three laps and then try and get a feel for things – but these aren’t the right tyres.”

Plainly listening, he had already matched my laptime by the third time around. He went on to take out great chunks of time as the circuit improved briefly, worsened again under heavy rain, and 34 cars of traffic ebbed and flowed around him. He acquitted himself brilliantly, soldiering on while other teams with the crews and kit to do it swapped their cars to wet tyres. We held ninth place overall, one of the very fastest cars on semi-slicks, when a red flag for an accident ended the session. A strong showing, but it left a lot of work to do to even match our last performance in the race. 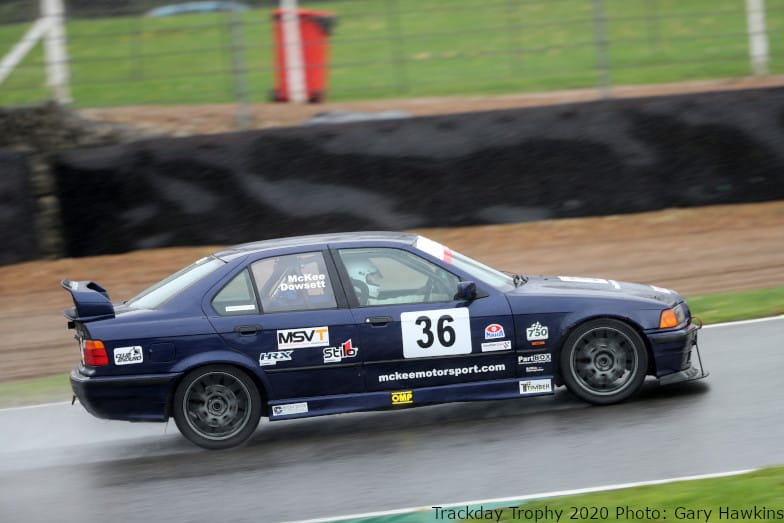 Once the car has been checked over and pronounced fit, the usual pastime for the hours between qualifying and race is spectating. Watching the other championships competing that day can be more than just entertainment: it’s a good way to keep an eye on track conditions and, particularly if you’re new to the circuit, watch for creative lines and see which overtaking manoeuvres pay off. This scale of rainstorm was enough to dampen even my enthusiasm for walking the sidelines, though, and much of our break was spent making sure the car was entirely waterproof – spray gets everywhere! – and trying to keep our racewear dry.

As our race time approached, though, the sky lightened and a decision arose. What would be the right tyre? It wasn’t a cold day, and a stiff breeze could be enough to dry the circuit over the 45 minutes of our race. Committing to the wet tyres might mean a lovely drive for the first few laps, but a real struggle to hold position on a drying track at the end. Waiting as long as we dared, we watched the race before – SuperCup – start and the spray they threw up was the decision. We were going on wets. 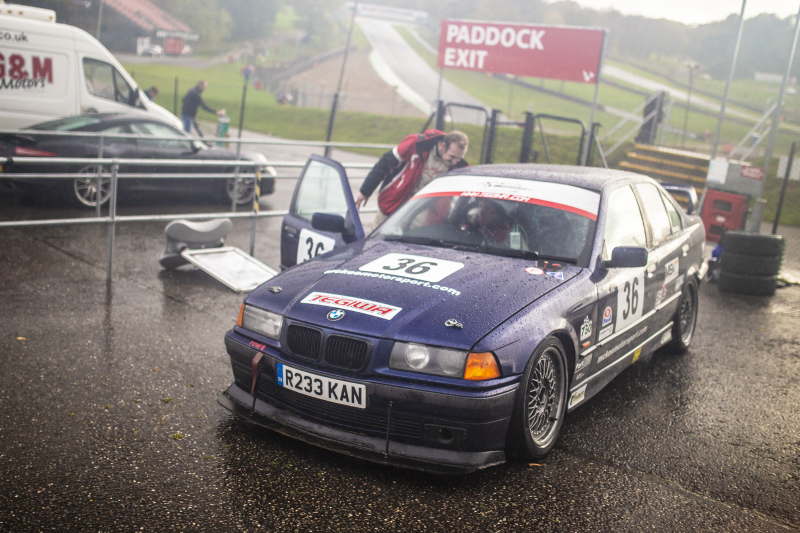 Even when that SuperCup race was red-flagged and its restart delayed by barrier repairs, giving the circuit more drying time, we stuck to our treaded guns and spent the time doing pitstop practices. We arrived at the assembly area to find it full of cars on their dry tyres. Were we about to be caught out again?

Not a bit of it. A rain shower came over again while we waited for SuperCup to finish, and their laptimes remained stubbornly eight seconds slower than their dry qualifying had been. We felt sure we were on the right tyre this time – but in any case, it was too late to change and would all come down to how we could drive these conditions. 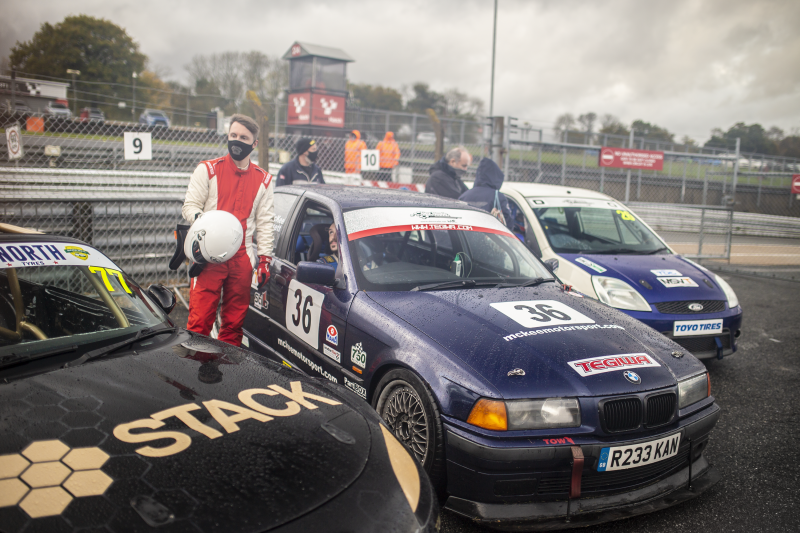 I started the race, packed in on the small grid on Brands Hatch’s start-finish curve – it’s not at all fitting to call it a straight. 9th place put me on the inside line for Paddock Hill Bend, but also very close to the pit wall. I expected a good launch surrounded by front-wheel drive cars, much more difficult to get off the line quickly than my rear-wheel drive BMW.

What I didn’t expect was to rocket forward so quickly when the lights went out that almost everyone else appeared to be standing still. I tried to go left, boxed by another car, and tried to go right to find the wall much too threatening. I had no choice but to lift off and hold position behind the pedestrian start of the car ahead, and got thoroughly mugged for it: a stream of drivers passed around the outside of Paddock Hill and left me in 14th place.

I fought back, leaning on the car as much as I dared while it howled and slid beneath me, trying to get through the pack and stay in touch with the leaders. There followed lap after lap of battling lower-class hatchbacks that didn’t have the power, but sure had the weight distribution for an easier time on the slippery surface. I was having to drive by intuition and feel to make progress, and use plenty of imagination to pick a way past the cars ahead.

It was bloody brilliant. 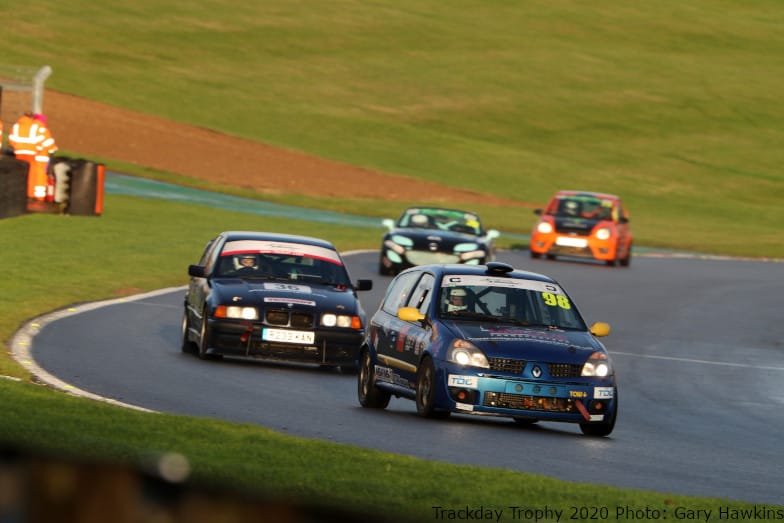 Racing in a big field, especially on such a small circuit, is a full-time job for your brain and quite simply the harder you can concentrate the better you’re going to do. All the same, I still had a few moments where I could really relish the challenge and enjoy racing this car, out on the ragged edge, and improving our position as the minutes ticked by.

From sixth place I brought the car into the pits for Rob to have his shot. There was time enough to tell him that I thought we had the measure of the cars ahead – we were quick enough to move forward. He rejoined the race in fifth after a smooth pitstop and, again, immediately matched my laptime. This guy has some instincts, alright, and was straight into battle as soon as he hit the circuit. 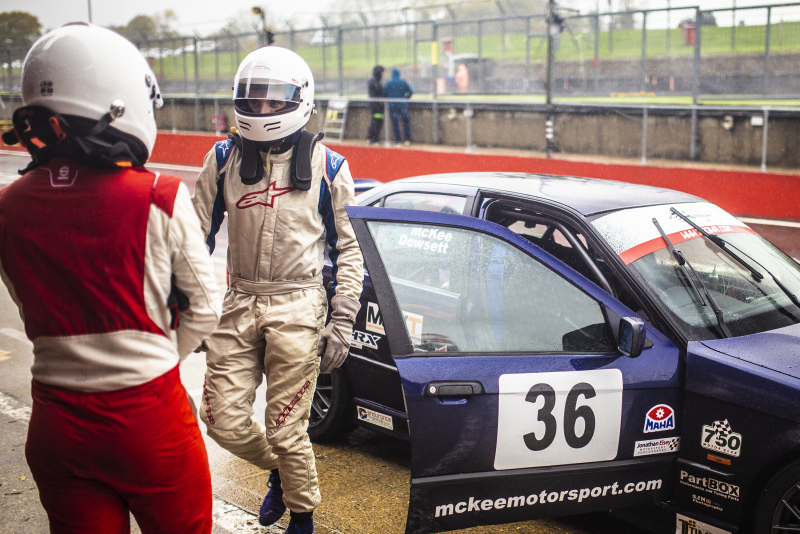 His progress was hampered by a short safety car period, during which my frantic signalling from the pit wall conveyed that he was lying fourth and the car ahead was for position: pass Jonathan Candler’s Peugeot 306, and we’re bagging trophies again.

He wasted not a moment on the restart. Following Candler through as he passed not one but two backmarkers on the very first corner of the resumed race, Rob piled on the pressure and got past just a lap later with a brave move around the outside of Paddock Hill. Exulting in the car, he knew he was back on the podium, and by this time we were the only rear-wheel drive car still on the lead lap – but he wasn’t stopping there.

The frontrunning fight of the Lundy / Lundy Toyota Celica against Harvey & Pearce’s Honda Civic was only four seconds up the road, and while they fought for the lead Rob reeled them in relentlessly. Only a minute later he was right on top of them and poised to capitalise on a major mistake from Sam Pearce in the Civic – sliding broadside through Clearways and heading for the gravel, he was a sitting duck for the big BMW.

Not this time. A gut-wrenching failure to select third gear, clutch right down but gearbox steadfastly refusing to go in, stranded Rob rolling through the corner while Pearce recovered. Worse, Candler’s 306 was able to slip by to reclaim third place by the time a quick-thinking rev-match let Rob get some drive. The air in the cockpit turned as blue as the paint as Rob gave chase with only three laps to go. 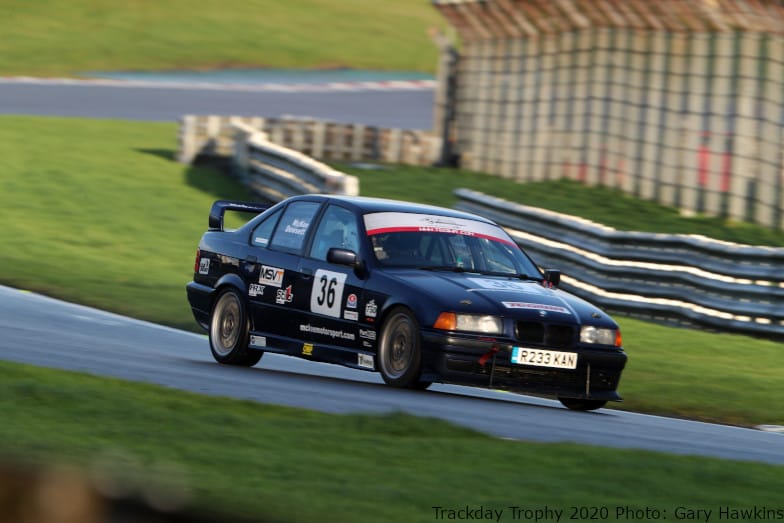 Brands is laid out in a natural amphitheatre, and if the justifiably excited car owner runs from the pit wall through the garages to the back of the paddock each lap, they’re able to watch almost the entire circuit. I saw it all happen, and the joy of Pearce sliding wide turned to anguish as my car slowed unaccountably. I later discovered a clutch actuation problem, with work already underway to be certain it can’t happen again. Seeing Rob pick up the pace again at least assured me that there wasn’t a terminal problem, but with four minutes on the clock, I had no idea whether he’d made the position back.

No second chances, no quarter given – of course he got it done. Catching Candler a lap and a half later, Rob nailed the perfect exit from Graham Hill corner and powered past into third, skipping across the kerb as he went up the inside through Surtees right before my eyes. The fear of falling off the podium melted away and turned to a new question: might we get second after all?

Rob drove his heart out and got right on the Civic’s rear bumper, but there just wasn’t enough time. He crossed the line third, less than a second behind Pearce and a bare four seconds off the Lundys’ winning Celica. The reality of scoring an overall podium once more, at Rob’s home race with his parents there to watch, was more than enough to overcome any disappointment at not making it higher up the order – a fist held aloft in the driver’s window as he took the chequered flag told me all I needed to know. 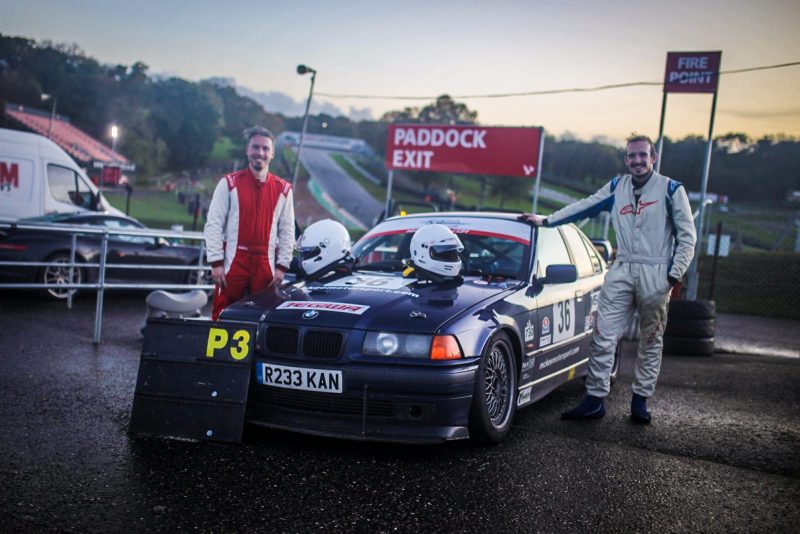 What a day. What a race. What a driver!

Success in karts and doing sprints and track days in your road car are always strong signs, but jumping into a saloon car and racing it in close quarters on a packed grid of seriously competitive drivers is still a tall order. Rob rose to the challenge fantastically at Oulton Park in August, and to see him repeat it in the wet at Brands shows it was no flash in the pan.

One thing’s for certain: he’ll be back for more trophies in 2021.

Will you be joining him? 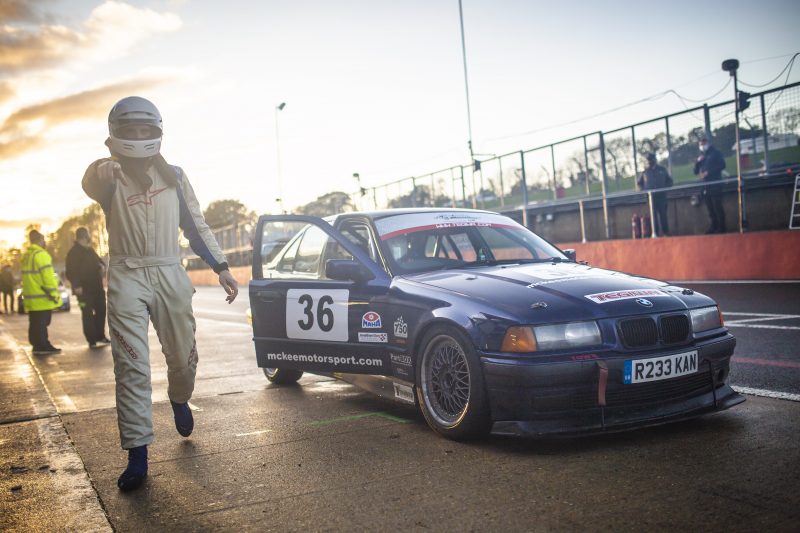