The red lights finally went out on my 2020 season on 19th July at the Snetterton 200 circuit, where I made my début in 750 Motor Club’s Ma7da Series driving James Lewis-Barned’s car. Within seconds, I was plunged into my first experiences of sprint racing, one-make racing and open cockpit racing all at once. Learning curve? That’s Riches, isn’t it?

We had at least been able to set up the car on the Monday preceding the race, being graced with a drier day at Donington Park this time. It didn’t take much to get this straightforward machine handling beautifully. We had already settled on ride heights and the geometry felt fine, so it was a simple matter of dialling out the last vestiges of high-speed understeer with the one-way adjustable dampers, and puzzling out the correct cold tyre pressures.

The result was a riot of a racing car. I’d never driven it in the dry before – my high hopes were met and then some. I don’t know of a more communicative and playful chassis than this one; its willingness to work with the driver right to the limits of its performance inspires such confidence.

If returning to a circuit for that test had felt exciting, it was nothing compared to going to a race meeting. The break of nearly nine months was longer than I’d ever gone without turning a wheel in anger. On arriving at Snetterton to find actual, live motorsport happening in front of me once again (the Toyota MR2 Championship having a remarkably considerate race), I expect my grin must have been visible from Jonathan Palmer’s helicopter. 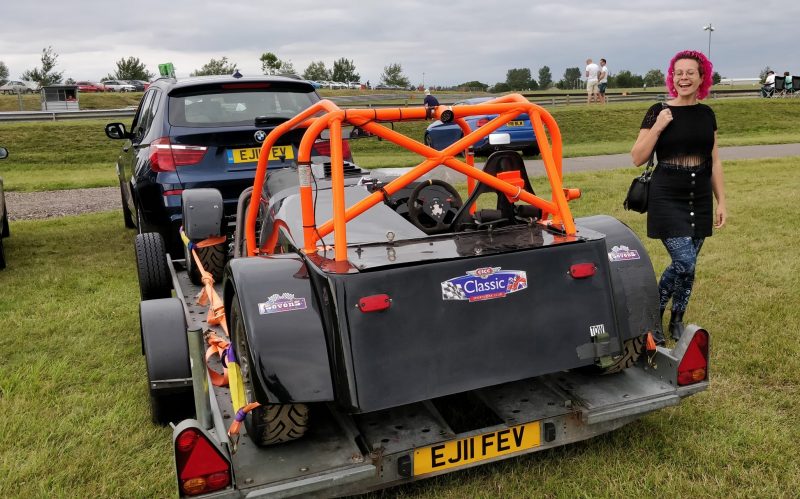 After the car was unloaded and prepped and Saturday’s competition concluded, a track walk followed by camping at the circuit led me into race day. It dawned drizzly and damp, but without any of the rush and stress that a 9am qualifying session would usually bring: at a Covid-secure event signing-on, scrutineering and drivers’ briefings are all conducted in advance.

Entrants self-declare their cars fit for the event on a web system, listing the compliance standards and expiry dates of their safety equipment and giving contact details of all attendees. Clubs have been doing a fantastic job of laying out every part of the meetings’ procedures clearly online. Two cars from each series are selected at random for a socially distanced compliance check, but the overall tone of the paddock was significantly more relaxed than previous seasons.

By contrast, the wet qualifying session shared with the Sports Specials field was an eye-opening experience. I’m accustomed to a saloon car with ABS and the option of fitting wet-weather tyres; to control costs, all Ma7da cars run a Yokohama A048 tyre which is superb in the dry but gives only a passing nod in the direction of water dispersion. 15 minutes felt precious little to put in a clean lap around a circuit overrun by 40 cars, of which perhaps 30 were still on the Tarmac at any one time. Basic survival climbed my priority list as the session wore on and someone helpfully dropped fuel around Coram, so I was delighted to find that I’d qualified fifth of the 16 cars entered for our two 15-minutes races. 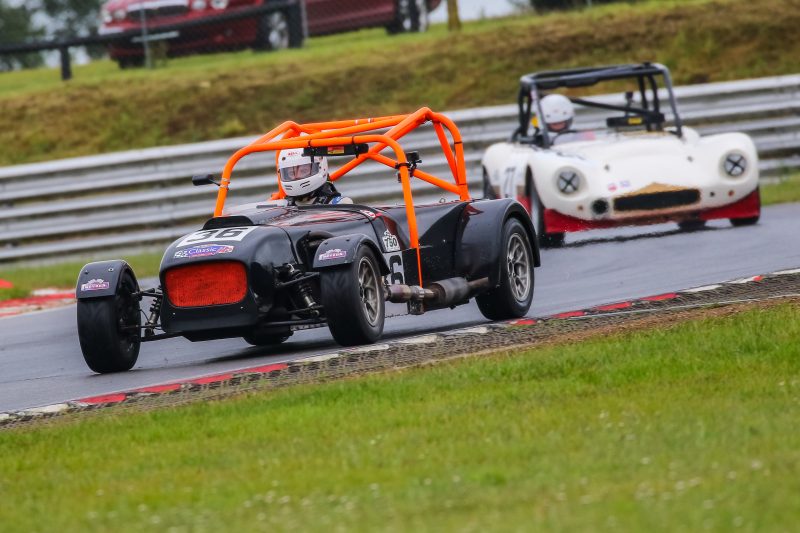 With no new issues uncovered and certainly no setup learning to apply to the car for the races, which looked certain to be dry, I reverted to my default role of enthusiastic spectator until my first race. Watching the Locost Championship was particularly instructive – being a similar body but with far less power, their racing accentuates the slipstreaming effects I was about to experience.

On the way to the assembly area, it occurred to me that I didn’t know quite how to start this car from my slot on the third row of the grid. I’d never launched it before and to compound the difficulty of its unwillingness to idle properly and awkward handbrake, Snetterton’s grid is on an incline. With no green flag lap, I needed only a couple of practice starts on my way to the grid to learn enough to completely fluff it when the lights went out. 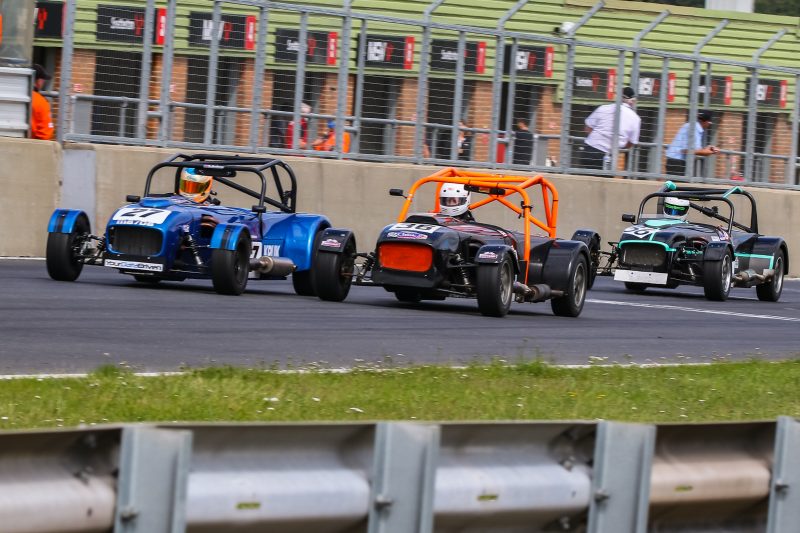 With my three-pedal juggling act distracting me enough to react a little slowly, I then fed in far too much power. The lukewarm Yokos spun right up and I was swamped with cars. No matter – I’m here to do some racing, and the thrill of approaching the first corner three-wide with competitors’ engines roaring through my helmet cannot be found anywhere else. It felt fantastic right from the start and I quickly found myself able to hold my own, especially under braking and into the slower corners of the circuit.

In the faster corners, I had to adjust my racing very quickly: these are small cars, and gaps which don’t bear contemplating in my BMW are easy pickings for these hornets with a tyre at each corner and clear lines of sight everywhere. A glance in the mirror might have me feel safe as I chose a line into Brundle, only to have a car up the inside of me a heartbeat later.

The accelerative advantage to be found tucking in behind another car down a straight makes the jockeying for position absolutely relentless – I could defend successfully and really stick a corner exit over a competitor and then find them right alongside me a few hundred yards later. These were proper battles that called on every ounce of racecraft.

It was utterly brilliant and, in the rare moments in which I wasn’t under immediate fire, I exulted at the sheer experience of it.

My race boiled down to a mano a mano contest with the #56 car of Dan Sibbons, trading places twice a lap until finally an overly ambitious entry to Riches saw him run wide enough for me to break free. More exultation – the triumph of securing fifth place in such a fierce race felt better than some victories I’ve scored. The timesheet told me that that final, comfortable-feeling gap to come home ahead was in fact just four tenths of a second. 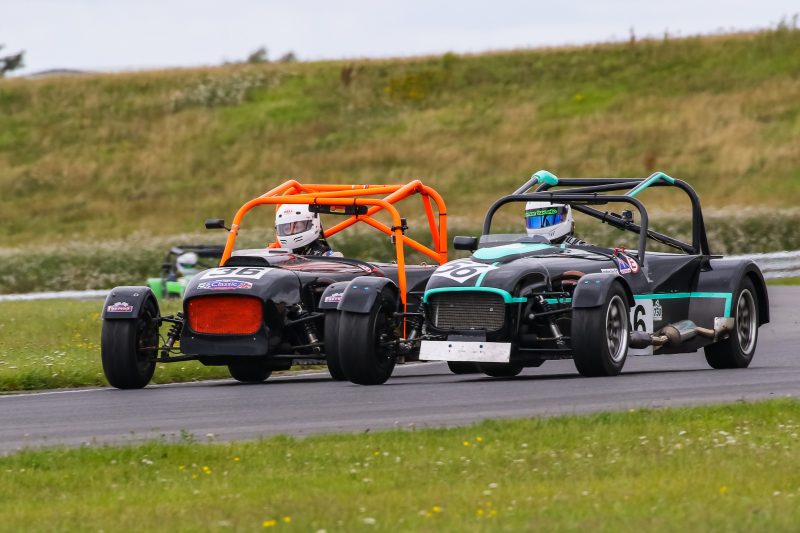 The frenetic nature of a sprint race isn’t its only joy: you get a second one on the same day. The car had felt so good and I was on such a high as I crossed the line that upon parking it up in the paddock, I didn’t feel a need to do anything beyond putting some more fuel in it and going out again.

I lined up third on the grid for the second race after mechanical failures knocked out two drivers who’d finished ahead of me earlier. This time I made no mistake with the launch and was hanging onto the coat-tails of the leaders until I found a very long brake pedal at the end of the Bentley Straight. A late and confused corner entry saw me rightly mobbed by my competitors, and the race became a fight to lose as few places as possible while I figured out what my middle pedal was telling me.

A real tendency to lock the front tyres and an unwillingness to rotate under trailbraking – all unravelled whilst wheel to wheel in the battle for third place – had me wonder whether I’d any rear brakes at all. By the time I’d started driving around it with all my earlier advantage lost, I’d fallen to seventh wondering how I’d recover when another’s misfortune became my gain.

Locked in a tight battle ahead of me, Danny Andrew in the #27 car missed third gear, and so close was Dan Sibbons in his slipstream that avoiding action was impossible. The two collided, breaking Sibbons’ steering and spearing him across the grass. Andrew seemed, reasonably enough, to have lifted off during the impact and I caught him to inherit fifth place. A lap later I was able to claw past David Jones’ #50 car and finish fourth with no small measure of relief. We later found the all rear brake fluid had drained out through a loose union. 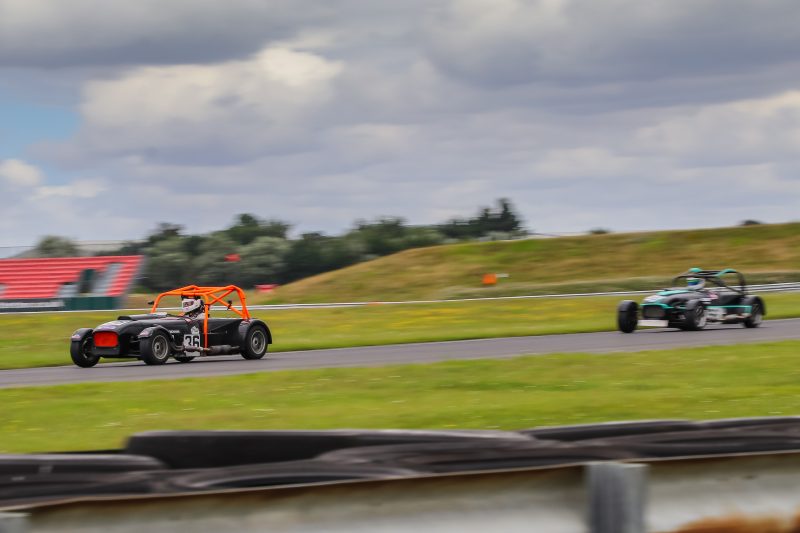 Overwhelming and fabulous though it is, the intensity of the racing doesn’t tell the whole story. Throughout those tussles I’d felt comfortable putting my [James’s..!] car right up to these drivers; there was awareness and respect and, when necessary, the foresight to yield a position and come back again in the next corner.

Sprint racing can sometimes seem to descend into a melée, but this field was doing it right – an impression underlined by big thumbs-up all round at race end, and kind words with enthusiastic story-swapping in the paddock.

I knew the formula had potential, with cars cheap and simple to run but enormously entertaining with unbeatable performance per pound (either sort). That it comes with such top-quality racing and a welcoming, supportive paddock is a club racers’ dream come true. They were even kind enough to name me Newcomer of the Meeting! 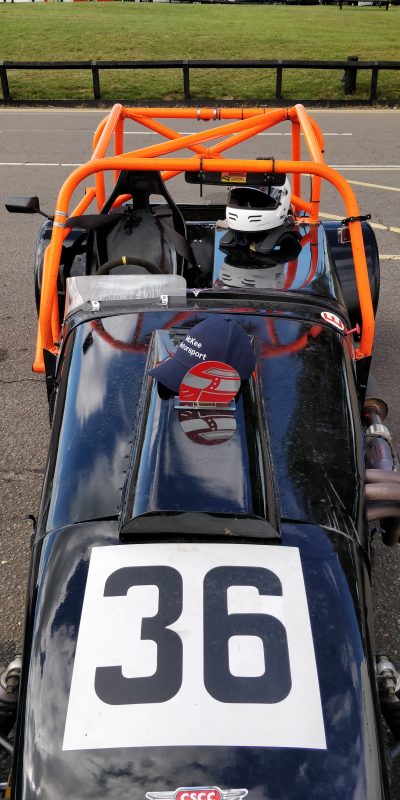 Cheers for the outing, James – I may just make a habit of this…

You can find out more about the Ma7da Series at https://www.750mc.co.uk/formulae/ma7da